Vacation, (all I ever wanted)

Share All sharing options for: Vacation, (all I ever wanted) 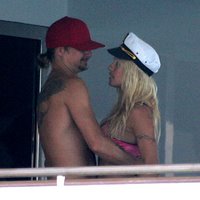 I'm back from vacation and my regular visit to the great white north. Only problem was that the north was just as hot and muggy as the south! It's always nice to visit back home, but I much prefer living here in North Carolina.

While I was gone, Hurricanes bandwagon jumper Kid Rock tied the knot recently with on again, off again lover Pamela Anderson. Sometimes I wonder about these Hollywood types. Could Pam be looking for some publicity since her ex, Tommy Lee is on TV twice a week with his hit show, Rockstar-Supernova? (love that show). I wouldn't exactly call theirs a "white wedding" like Cam's and Cody's, but I do wish them the best of luck. They will probably need it. We see the lovely couple above. Maybe we will see Pam join Kid in the owner's box this coming year? As long as he wears his Carolina Redneck Hockey tshirt, Kid Rock is always welcome!

It doesn't seem I missed much activity from the Hurricanes. We made a couple more 2-way signings most likely for Albany, ex-Canes Jesse Boulerice and Ryan Bayda. There were interesting signings around the league, especially by the Wings as they signed another ex-Cane Danny Markov and Mr Groin himself, the aging Dom Hasek. The Wings could be in serious trouble in net this year since they are depending upon 2 guys who are on the other side of being in the prime of their careers. (to put it nicely) Although I guess they can always make a trade once the season starts if necessary. But I will bet right now they will have to make a serious upgrade in goal in order to keep up with Nashville. The Preds look to take charge of the weak Central Division, in my opinion.

Speaking of goalies and the Red Wings, what's the story about Manny Legace? Doesn't anyone in the league want this guy? Personally he's not a favorite of mine, I don't like his attitude, but the guy can play. I'm really surprised a team hasn't grabbed him by now.