Ilya Kovalchuk and the Atlanta Thrashers are in Raleigh to play the Carolina Hurricanes tonight at the RBC. Kovalchuk has been on a tear since ex-coach Bob Hartley was fired and leads the league in goals scored with 32. He has always been a thorn in the side of the Canes, so they will need to pay special attention to him tonight.

Recently acquired ex-Hurricane Mark Recchi will be joining Kovalchuk and friends. Recchi has been on a pretty good ride himself since arriving in Atlanta, with 5 goals and 5 assists in just 11 games.

Carolina is coming off a well documented 2 game losing streak, as well as a disappointing month of December. They have suffered through a number of injuries and will continue to do so. Not only will they be missing previously injured Justin Williams, David Tanabe, Bret Hedican, and Matt Cullen, but Nic Wallin pulled a groin muscle and is out indefinitely.

Matt Cullen attempted to play against the Islanders on Monday night, but suffered a setback and will be out again for an undetermined period of time. The general feeling is that Matt should not have attempted that early comeback after being knocked out by Colton Orr in the Rangers game. The team will be more cautious before he attempts another return.

Casey Borer has been recalled from Albany to replace Wallin. The blueliner has had a fine year so far for the River Rats and leads their defense in points (14), and in plus/minus, (plus 13). Good luck to Casey in his NHL debut!

Here are the projected lines for tonight, according to Lord Stanley's Blog...


Cam Ward will be the starting goalie and he'll be looking to begin a string of consistent high quality performances tonight, something the entire team is hoping to do. Luke DeCock reported that the goalie is hoping for a fresh start with the help of some new white pads. But not only will he be sporting new pads tonight, he will also be wearing another brand new mask. I recently received an email informing me that Cam will be trying this mask and that it's very similar to his most recent "Blackbeard" themed one. The major difference is that this one has a silver background instead of red. A picture of it is below. Thank you Steph at EyeCandyAir for the information! Hopefully the new equipment will bring the whole team a bit of luck. They could use it.

Game time is at 7 tonight with a national broadcast by Versus. The Hurricanes own John Forslund will provide the play-by-play. 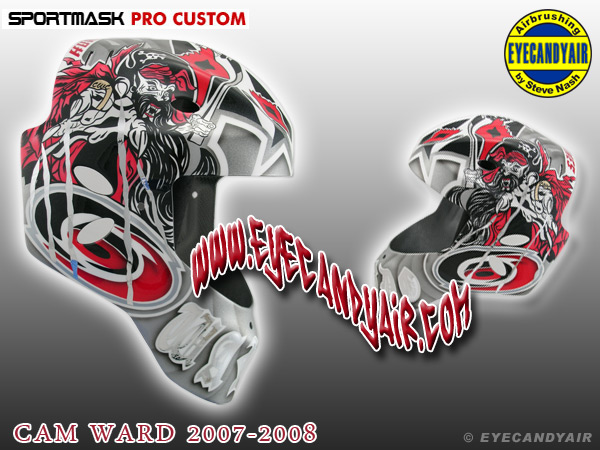