Getting Closer - Pens Try to Make it a Series

Share All sharing options for: Getting Closer - Pens Try to Make it a Series

The Pittsburgh Penguins beat the Detroit Red Wings by a score of 3-2 on Wednesday night, as they attempted to pull themselves back into a series that Detroit once had a stranglehold on. Sidney Crosby finally lived up to the hype and scored two goals for the home team.

The victory pulls the Pens within a game, but Detroit still leads the series 2-1. Even though Pittsburgh has won 17 consecutive games at Mellon Arena, (not losing since back in February), I still can't help but feel that the Wings have them right where they want them. If Detroit can win the next game in Pittsburgh on Saturday night, then they will be able to close out the series with a win in Michigan on Monday, and hoist the Cup on their home ice.

The next game will be the most important one to date. The team who wins that game will most likely win the series and I still feel that will be Detroit.

After reading the transcripts of the post-game interviews held with the coaches after game 2, I can't help but think that Penguins coach, Michel Therrien must have gone to the same coaching school as Buffalo task-master, Lindy Ruff. Check this out and see if you can find anything familiar.....

COACH MICHEL THERRIEN: It’s really tough to generate offense against that team. They’re good on obstruction. It’s going to be tough to generate any type of offense, if the rules remain the same. So it’s the first time we’re facing a team that the obstruction is there, and we’re having a hard time skating to take away ice.

We took two penalties tonight on the goalie. We never take penalty to the goalie in the playoff. I’ll tell you something, I reviewed those plays. He’s a good actor. He goes to players, and he’s diving. Took away our power play. Got to get focused. I know our players are frustrated right now. It’s tough to play the game. But Osgood did the same thing against Dallas under Ribeiro.

Our team never go to goalie. We never did it. And we don’t target the goalie. But this is, want to talk about experience, he goes to players, and he knows what to do, I guess.

When in doubt, blame the refs and call the other team cheaters. Don't ever take any responsibility or give the other team any credit. That's the exact same philosophy that (worked so well) for Lindy Ruff in 2006 when he called the Canes cheaters and divers.

Therrien seems to be pretty much the same pathetic coach who had a major meltdown on the Montreal bench because of a call against his team by referee Kerry Fraser back in the 2002 playoffs. Fraser then had no choice but to hit the Habs with yet another penalty because the coach was literally jumping up and down on the bench and waving his arms like a mad man.

It was in the third period of the game and the Hurricanes were losing at the time 3-0, but went on to score during the ensuing powerplay, fully utilizing the 2 main advantage. The rest is history as Carolina scored twice more in regulation to tie the score, and then eventually won the contest in over-time.

The game is known as the "Miracle at Molson", and Therrien was the catalyst.

The coach must have taken some anger management classes because his once fiery temper seems to be under control now, but he still obviously holds refs in contempt. I sincerely doubt that whining like that will help you to win a Cup series, but we'll see how it turns out for him and his team. 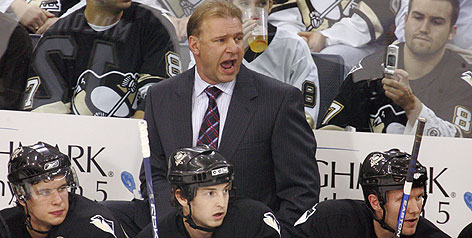 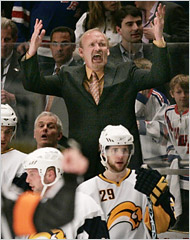