Share All sharing options for: Goalie Rankings Peg Ward Near The Bottom 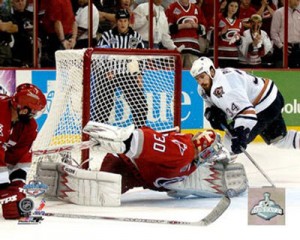 Maybe it's for the best, because the last time Cam Ward had low expectations tagged to him, he turned around the Hurricanes' first-round playoff series and eventually led Carolina to the Stanley Cup, along the way earning himself a Conn Smythe Trophy.

See, back then at the beginning of the 2005-06 season, Ward was a rookie backup goalie. Some predicted he had a bright future, but the idea that he could lead a team to the promised land as a fresh-faced 21-year-old would have been considered absurd at best. Then No. 30 turned in a playoff performance for the ages, earning comparisons to Patrick Roy and Ken Dryden, the two other goalies to earn playoff MVP honors in their first NHL season.

But after two years of stories about how hard Ward had worked to become an established No. 1 netminder, how he dropped weight to be more explosive and in shape — and the disappointment of two missed postseasons — expectations are lower for Ward this year. All the stories have been about the acquisition of defenseman Joni Pitkanen (coupled with the departure of Erik Cole), the injury recoveries of captain Rod Brind'Amour, Justin Williams and Matt Cullen, new alternate jerseys, Eric Staal's blockbuster contract extension, and even the security of Peter Laviolette's job as head coach.

So when a couple media outlets recently released goaltender rankings for all the teams in the NHL, I wasn't surprised to see Ward near the bottom.

First, The Hockey News ranked Carolina's goaltender tandem as the league's 26th best (using a scoring system called the Goalie Confidence Index, or GCI, that is based on statistical information). The statement on Ward was predictable:

"Sure, Cam Ward won a Stanley Cup and the Conn Smythe Trophy, but hockey's all about what you've done lately. And lately, Ward has been pitching mediocre numbers ..."

For the most part, the rankings seem reliable and close to accurate. Montreal's position at No. 1 could be argued all day by many — including me — but having San Jose, Detroit, Anaheim, New Jersey, Dallas and the Rangers all in the top eight seems to be a fair assessment. The rankings aren't perfect. Roberto Luongo, penalized by the Canucks' 2007-08 depleted defense and inability to score, checks in at No. 13. And Edmonton (18th), Tampa Bay (20th) and Calgary (21st) are clearly too high for the first two, too low for the last.

But fair enough — Carolina's defensive numbers, and thus Ward's results, haven't been up to snuff. It wasn't surprising that a statistical analysis of goalies led to Ward being near the bottom. Laviolette's high-flying offensive style will never be confused for the New Jersey and Minnesota lock-down defenses.

Then, Sportsnet.ca's Chris Nichols rated the goalies for fantasy hockey purposes, ordering and lumping them into five categories: Blue Chippers, High-End, Quality Merchandise, Sale-Priced and Diamonds In The Rough. Ward fared a little better in Nichols' opinion-based rankings than he did in THN, coming in at No. 21 under the "Sale-Priced" heading. Nichols writes that Ward "can move up in the rankings if team follows up on improved D pledge," and that the back-up threat (Michael Leighton) is "not gonna happen."

So it's safe to say Ward is flying under the radar heading into the 2008-09 campaign, but that doesn't mean there isn't pressure on him to perform. Another season out of the playoffs would likely shine a bright light on Ward's play and put into question his ability to lead a team over an 82-game schedule. Also, he will earn $2.5 million this season and $3.5 million in 2009-10 before reaching restricted free agent status. If he cannot return to the playoffs the next two seasons, Carolina GM Jim Rutherford will have to think long and hard about whether or not Ward will deserve a long-term deal to be the Canes' No. 1 netminder.

This is a lot of doom and gloom, for sure — but it's exactly what Ward needs to succeed this year. The focus this season has been shifted to the rebuilt defense, and the expectations on Ward have been pinned to that group's success. With the Canadian media lowering — and even writing off — any chance that Ward could return to his magnificent 2006 playoff form, Ward will have the opportunity to prove to anyone and everyone that he's the future in net for the Canes without having to justify why all offseason with paragraph after paragraph of talk about his weight, flexibility, maturity and ability.

It's hard to remember that Ward is still just 24 — the third-youngest starter in the league behind Carey Price and Marc-Andre Fleury — probably because of his past glories. He has done things many of the league's top goalies have never experienced, like dropping into the splits and flashing out a pad to stop a potential game-tying goal in Game 7 of a Stanley Cup Final. He knows what it takes — understands the commitment, the even-tempered attitude and ability to let you instincts take over — to be one of the league's best.

And if Carolina can return to the playoffs, I guarantee the players looking at him from the opposing bench and the goalie seeing his steely glare from across the rink will remember what Cam is capable of — and he won't be at the bottom of their lists.