Grading The Captains And Predicting The Future

Share All sharing options for: Grading The Captains And Predicting The Future

Philadelphia's Mike Richards and Tampa Bay's Vincent Lecavalier — two players who were pegged to be captains from the second they were drafted.

For Lecavalier, he was first named the Lightning's captain in 2000-01 and at the time became the youngest in NHL history (beating out Detroit's Steve Yzerman). But was stripped of his "C" prior to the next season by head coach John Tortorella. Richards was an alternate captain for Philadelphia last season, but has been groomed for the orange and black's captaincy from the moment he slid on the Flyers jersey.

This week, Richards made good on his potential, while Lecavalier returned to the role he once vacated. In light of all this, what better time to look at the league's captains — and do some grading — and also peek into the future and predict who is letter-worthy down the road. We'll start with 10 teams today — in alphabetical order — and wrap it up with two more installments in the coming days.

Say what you want about Pronger, but he's one of only four active players to have worn the "C" on two different teams. The others — Jason Smith, Michael Peca and Chris Chelios — are no longer captains in the league, but still considered solid leaders on their respective teams. Pronger captained St. Louis from 1997 to 2003 — all successful seasons, but no Stanley Cups — and won a Cup as an alternate with Anaheim in 2006-07, but his first seasons last year as the Ducks' captain ended with an early playoff exit. Pronger's a good leader who stands up for his teammates, but his frequent suspensions and reckless play keep him from being among the league's upper echelon. Grade: B+
The Future: If I had to guess, I would say current alternate captain Chris Kunitz is next line for the Ducks' captaincy. Emerging superstar Ryan Getzlaf is a good guess, as well.

With Bobby Holik's departure, the Thrashers could end up with their third different captain in three seasons. The better bet, however, is Atlanta will go with numerous alternate captains or rotate the captaincy this season. Grade: N/A
The Future: My money's on 2008 third-overall pick Zach Bogosian one day wearing the "C" in Atlanta. His father, Ike, was co-captain of the Syracuse University football team for a season in the early 1980s. The apple doesn't fall far from the tree with Zach — all indications are he's a natural leader.

When Chara was signed to a long-term deal by the Bruins in 2006, they immediately gave the captaincy to him, filling the vacancy left when Joe Thornton was traded to San Jose. Not ideal, in my opinion. But Chara immediately took to his new leadership role, and, if I remember correctly, one of the first things he did was contact Carolina captain Rod Brind'Amour about what it takes to wear the letter. Like Pronger, Chara is tough as nails, but not as careless and dirty. He also has accomplished nearly as much. Grade: B
The Future: It's easy to forget him because he missed most of last season, but Patrice Bergeron is probably the captain-in-waiting in Beantown.

The Sabres used a rotating captaincy last year, though it was spread between numerous players rather than the alternating pattern they used before Daniel Briere and Chris Drury left town. I'll go on the record as saying I'm not a fan of this method. Grade: N/A
The Future: Both Derek Roy and Justin Pominville served as captains for part of last season, and both are now signed long term. I would pick Pominville, but my gut says Lindy Ruff will eventually choose Roy for the permanent job.

Iginla has been the Flames' leader — and the first black player in NHL history to wear the "C" — since 2003, was an alternate on Team Canada's entry in the 2006 Winter Olympics, and wore the "C" for the Western Conference in the 2008 All-Star Game. He's been on two Memorial Cup winners and came within a game of winning the Stanley Cup in 2004. That's quite a resume. He's as gritty as they come, plus he's an elite player. They don't get much better than Iginla — but he needs a Cup to tie it all together. Grade: A-
The Future: Iginla's only 31, and I'd guess he'll be leading the Flames for the rest of his career. That makes it tough to predict who is next in line, but the best guess might be Dion Phaneuf.

Brind'Amour's always been a great leader. He wore the "A" in Philadelphia for a long time, even filling in as captain during Eric Lindros' many injury absences. He was an alternate to Ron Francis when he arrived in Carolina and took over the captaincy following the lockout when Francis retired. What did he do in his first full season as a captain? He led the Hurricanes to the Stanley Cup. I want to give Brind'Amour top marks, but there were some grumbles last year — albeit from the message boards — that his time as captain may have past. I don't buy it. Grade: A
The Future: There are a few candidates here, but Eric Staal — locked up until 2015 — will one day wear the "C" in Carolina.

The Blackhawks remind me a lot of the Pittsburgh Penguins: have numerous terrible seasons, leading to the stockpiling of several top prospects; get antsy and overspend on the best defensemen on the free agent market; and finally, name your young superstar the team's captain. Toews, given the "C" this offseason, will likely one day be a great leader — we'll see how good he is in the present soon. Grade: Incomplete
The Future: Toews is 20 — he's going to lead Chicago for a long, long time. 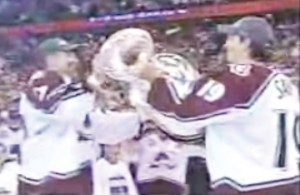 Two-time Cup-winning captain. Two-time All-Star team captain. Only captain in Colorado history. Longest-tenured captain in the NHL. Should I go on? Sakic often flies under the radar — see all the press Mats Sundin got when he considered retirement compared to what Burnaby Joe got — but in my book he's the league's best. Want the final proof? Instead of being the first to hoist the Cup in 1992, he handed it off to Ray Bourque. Skill, smarts and class. That's Joe Sakic. Grade: A+
The Future: It's hard to think of anyone other than Sakic wearing the "C" in the Mile High City, but I'm going to go with Paul Stastny, whose father, Peter, was once the franchise's captain in the Quebec days.

Nash assumed the captaincy when Adam Foote was traded to Colordao at the trade deadline last season. Nash has flourished under coach Ken Hitchcock, developing into a two-way player who is on the ice in every situation. But until Columbus makes the postseason, it's hard to know what kind of leader Nash is. Grade: Incomplete
The Future: It's Nash or bust in C-bus. It's hard to believe he's still just 24.

Morrow's ascent to the captaincy was controversial. Stars icon Mike Modano was stripped of the "C" in 2006 and it was given to Morrow, who had recently been signed to a long-term contract. It wasn't pretty, but it has paid off. Morrow — with the help of former playoff question mark Marty Turco — led Dallas to the Western Conference Finals in 2007-08, his defining moment coming when he clinched the second-round series vs. San Jose with a Game 6 overtime goal. Morrow is everything you look for in a captain: he's hard-working, tough and makes his teammates accountable. And he's only going to get better. Grade: B+
The Future: Morrow won't turn 30 until January, but it's never too soon to look ahead. Prospect James Neal has been compared to Morrow, and like the current captain he can play a power forward game, drop the gloves and make a difference every shift. He's as good a guess as anyone.