Every Picture Tells a Story - Canes Out and About

Share All sharing options for: Every Picture Tells a Story - Canes Out and About

Congratulations to Patrick Eaves and his fiancee, Katie. Apparently, Patrick proposed at (at a lake like) nearby Lake Norman, where this recent photo shoot took place. 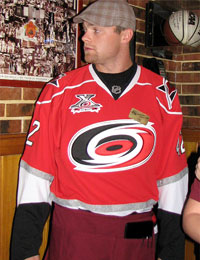 Tim Gleason took some time on Tuesday to do a charity gig at the Carolina Ale House. The defenseman was supposed to meet and greet customers, but ended up waiting tables and pouring drinks as well. Gleason doesn't seem to be the type to do things half-way.

Last but not least, the cover of the Hurricanes new media guide has a rather imposing photograph of the "Face of the Franchise". 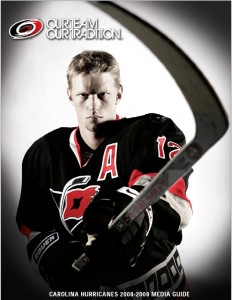 Tomorrow before noon, I will have a post hyping the Wednesday night preseason game against Washington with the lineups and some insight. Looks like the new number one pairing of Pitkanen and Gleason will make their debut.

Jeff O'Neill, Dan LaCouture, and Brandon Sutter will all be on the ice, continuing to make a case for their stay in Carolina.