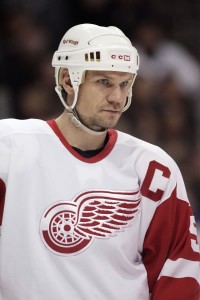 Here's the second installment in our three-part look at the league's captains and who the future leaders of the league may be. Part 1 can be found here.

It's hard to argue with Lidstrom's credentials. He's the first born-and-raised European captain to hoist a Stanley Cup, accomplishing the feat this past season. He's worn a letter in Detroit since the 1997-98 season, serving under one the game's legendary leaders, Steve Yzerman. He's also one of the greatest blueliners to ever play the game. The only blemish to Lidstrom's credentials is the fact the Motor City is chock full of leadership: Kris Draper, Chris Chelios, Kirk Maltby, Brian Rafalski, Tomas Holmstrom are all accomplished leaders in their own right. Grade: A-
The Future: One leader I didn't mention above is Henrik Zetterberg. The dynamic Swede is in line to succeed Lidstrom when the time comes and should serve as the Wings' captain going forward.

Moreau was named Oilers captain before last season, replacing Jason Smith, who had been dealt to Philadelphia. Moreau's first season as captain was speckled with injuries, and he wound up playing only 25 games. He broke his tibia in a preseason game the day after the announcement of his captaincy, missing 38 games, and later in the season broke his leg. Couple that with an injury-riddled 2006-07, when he played just seven games, and Moreau has played just 32 games since the Oilers Game 7 loss to Carolina in the Cup Finals in 2006. This year will go a long way in finding out what kind of leader Moreau is, but as of right now his absence says more than his play. Grade: B-
The Future: Jarret Stoll was once considered the future captain in Edmonton, but he was traded to Los Angeles this offseason. That has left a void. Is Andrew Cogliano captain material? Could Ales Hemsky overcome the criticisms of his pass-first play and lead a team in the locker room and in front of the media? It's hard to know, but for now I'm going to guess Shawn Horcoff, even though he's already 30 years old.

The exodus of Olli Jokinen vacated the captaincy in South Florida, and as of right now there's no one in place to replace him. Jokinen's grade probably would've been the league's worst, so it's best we don't have to slap a letter on the Panthers right now. Grade: N/A
The Future: Keith Ballard was considered a future captain in Phoenix. There's no reason to believe he won't have the same status in Florida — especially with a new long-term deal in place. Don't count out Stephen Weiss — he's worn an "A" since March 2007, and is still just 25.

Another team without a captain — the Kings saw their veteran leader, Rob Blake, leave for San Jose and have yet to fill his shoes. There isn't a whole of experience on this team, so it's hard to tell who — if anyone — will wear the "C." Grade: N/A
The Future: There are some dynamic young players in L.A. who play hard and do it the right way. Any one of Anze Kopitar, Dustin Brown or Drew Doughty could one day be the Kings' captain. I'll go with the rough-and-tumble Brown.

Another team with the dreaded rotating captaincy. Marian Gaborik ended the season wearing the "C," but it jumped around all season, and likely will again this year. Grade: N/A
The Future: Gaborik is a possibility if the team can sign him to a long deal, but I think the better choice might be Mikko Koivu. He has grown into a very good NHLer and also has the captaincy bloodlines: brother Saku wears the "C" in Montreal.

And that brings us to Saku. Koivu, the Habs' "C" since the 1999-2000 season, is the first and only European captain in Montreal's storied history, and he has also served as captain for the Finnish national team, starting with the 1998 Olympics. He also bounced back from cancer and is Montreal's on-ice and inspirational leader. One blemish for me, however, was Koivu's proclamation last year that the Canadiens were not a Cup threat. He was wrong — but he still led le bleu, blanc, et rouge to the East's best record. Grade: B+
The Future: Christopher Higgins is often called the Habs' captain of the future. The left winger is just 25, has three 20-goal seasons under his belt, and epitomizes effort. But while Montreal has had a European captain for almost a decade, they have never had an American captain, and Higgins is a New Yorker. If that's a consideration, than perhaps Kyle Chipchura is the future "C." Also, don't rule out emerging defensive superstar Mike Komisarek.

Arnott began his service as the Preds' captain last season — taking over for the traded Kimmo Timonen — and led an overachieving Nashville team back to the postseason. In his second season with the Predators in 2007-08, Arnott had one of his most productive campaigns by notching 72 points, four shy of his career high. While the first year of his captaincy was fruitful, this year will go a long way toward telling what kind of leader Arnott is. Grade: B
The Future: Perhaps best-suited lead the Predators down the road is 23-year-old defenseman Ryan Suter. Suter's offensive numbers are on the rise, and he also loves to get physical — the kind of all-around play of which captains are made. Don't count out recent acquisition Ryan Jones — he captained Miami of Ohio and is reminiscent of one-time Oilers captain Ryan Smyth, right down to the shaggy hair.

Langenbrunner was named captain last December, replacing Patrik Elias as the Devils' "C." One knock on Langenbrunner has been his inconsistency. That being said, he's also had success as a postseason performer, yet only managed four assists in five games last year. But let's not get confused: this is Martin Brodeur's team and, really, the last thing Langenbrunner needs on his cluttered jersey is another letter. Grade: B
The Future: The son of an NHL player and minor league coach, Zach Parise is New Jersey's best bet down the road. Parise's father, J.P., served as the Minnesota North Stars' captain in his final pro season. The younger Parise overcomes his size with speed, effort and tenacity. He'll be a good one.

Guerin is another of those captains — like Boston's Zdeno Chara — who was given the "C" without ever stepping in the locker room. After signing a two-year deal before the 2007-08 season, Guerin was given the captaincy of a team lacking leadership. I like Guerin — I always like how he plays, his mean streak and his ability to score big goals — but the Isles imploded last year under coach Ted Nolan and Guerin wasn't enough to keep them in the playoffs. It may not be Guerin's fault, but he didn't do anything out of the ordinary either. Grade: C+
The Future: Your guess is as good as mine. They have given up a bunch of prospects and draft picks in recent years, and the cupboards are pretty thin. Their first-round pick this year, Josh Bailey, is tabbed as a potential future captain, but I'm going to dump even more responsibility on rookie Kyle Okposo and give him the future "C."

Sportsnet.ca's Nick Kypreos said a little more than week ago that Chris Drury would be looked to for leadership with Jaromir Jagr gone to the KHL. Then a bunch of Web sites started running articles that Drury was set to be named the next Blueshirts captain. As far as I know, there's been no announcement and the job is still vacant. Drury, Scott Gomez or the currently unsigned Brendan Shanahan would all be good choices to replace the ineffective Jagr. For now, though, no one's the "C" in the Big Apple. Grade: N/A
The Future: Barely out of his teen years in his first NHL season, Marc Staal was rock solid on the back end for the Rangers and showed poise beyond his years. With brother Eric set to one day lead the Hurricanes, I see no reason to not expect Marc to join him and be the Rangers' captain one day.