A Captain Without A Letter: Part III

Share All sharing options for: A Captain Without A Letter: Part III 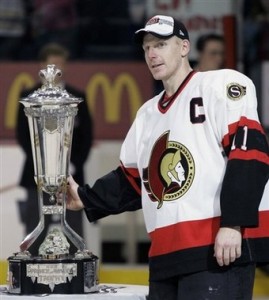 Here's the third and final installment of my never-ending captains series and look at the league's future letter-winners. We're on the final 10 — here's Part 1 and Part 2. I'm glad we went alphabetically with us, because we have a new captain in Vancouver — sort of (see headline). Anyway, finally ...

This is one of the harder captains to grade. The Senators were once considered underachievers, then Stanley Cup finalists, then a team destined to implode. All of this is under Alfredsson, and it all happened in three seasons. There's no denying Alfredsson's credentials as a player, but his captaincy has been both good and bad. Ottawa's trip to the finals made the Swede the first born-and-raised European captain to make it to the season's final series. But on his way there, he also did the unthinkable: he touched the Prince of Wales Trophy. Superstition? Absolutely, but that doesn't mean his decision to recognize anything other than Lord Stanley's Cup isn't a noticeable event. Alfredsson has been the Sens' "C" since 1999 and also has international leadership experience, serving as an alternate for Sweden in the 2006 Olympics. Grade: B+
The Future: Dany Heatley was once considered the future captain in Atlanta, but I think the best candidate to succeed Alfredsson — perhaps as soon as next season since Alfredsson's contract is up — is Mike Fisher. Heatley's an amazing player, but Fisher has more of what I look for in a captain.

Speaking of being tabbed as a captain, Richards was labeled as the next Bobby Clarke from the second he was drafted by the Flyers. RIchards certainly has the credentials — in 2005, he led Canada to their first World Junior Championships title since '97 and the country hasn't lost since. But while there's no denying the 23-year-old's skill, leadership and grit, he'll only begin serving as the team's captain this season, having worn an "A" in 2007-08. Grade: Incomplete
The Future: This job is all Richards' for a long, long time.

The big knock on Doan is that the Coyotes have not made the playoffs under his captaincy. But I don't know that you can blame Doan for it. Even on bad teams, Doan has played with all-out effort night in and night out, and I think his determination will grow on all the young talent on Phoenix's roster. He's one of the guys I would want captaining my team, but it's hard to grade him high when he hasn't led his team to the playoffs. Grade: B+
The Future: Captain-of-the-future Keith Ballard was surprisingly dealt to Florida in a package for Olli Jokinen, so that leaves the "C" up for grabs down the road. Kyle Turris is an up-and-coming player, but every time I see or hear him talk, he's as bland as a Saltine. I'm going with Peter Mueller, who I think is set up for a big season in 2008-09.

On Dec. 16, 2005, the Penguins gave Crosby, 18, an "A." In his first year as captain last season, Crosby led Pittsburgh to the Cup finals as a 20-year-old. It's hard to argue with that resume. But Crosby's competitiveness has, at times, struck some the wrong way. Some chalk it up to him having an insatiable appetite to win. Others label him as a whiner. I do know that, at 21, he's carrying the torch of not only the Penguins, but the NHL. Grade: A-
The Future: Like Richards in Philly, Crosby will be the Pens' captain as long as he's in Pittsburgh.

This is kind of the opposite of Doan. Marleau has presided over the Sharks since the second half of the 2003-04 season, and the team has had successful year after successful year. But those successes have come in the regular season, not the postseason. And Marleau — along with Joe Thornton, who knows all about being blamed for playoff futility from his time wearing the "C" in Boston — has been criticized for the Sharks' postseason shortcomings, to the point of non-stop trade rumors the past year. I really don't buy into the team's struggles being Marleau's fault, but he also hasn't pulled the team together amid the maelstrom. Grade: B
The Future: Marleau is signed thru next season and if he can rebound from a sub-par 2007-08, he may eventually sign a long-term deal to stay in San Jose. If not, \my money is on 2007 first-round pick Logan Couture. He's a born leader.

Brewer took over the Blues' captaincy in February, and while he wore the "C" St. Louis won fewer than a third of their games. That's not an indictment on Brewer alone, but the team's free-fall did come under his lead. Brewer, along with coach Andy Murray — who is on the hot seat because of the Blues' late-season tumble — will be judged by the team's start to 2008-09. But his short stint as captain shouldn't be graded to harshly — yet. Grade: B-
The Future: When I started my notes for this series, I had Erik Johnson penciled in as the team's future captain because I think he has a bright future and the skills to lead. I also felt the same about 2008 first-round pick Alex Pietrangelo, but was going to give Johnson the nod because he has a head start on his career. Johnson could still be the team's captain of the future, but his recent serious knee injury doesn't give him that — ahem — leg up. So let's roll the dice and say Pietrangelo.

He's baaaack. After signing his long-term extension this offseason, Lecavalier reclaimed the job first given to him in 2000, again becoming the captain of the Lightning. Lecavalier's first stint ended when former Tampa Bay coach John Tortorella stripped him of his captaincy after a year at the helm when Lecavalier missed the start of the season due to contract negotiations. At the time of his first captaincy, Lecavalier was the youngest ever NHL captain, passing Steve Yzerman's mark. We're not going to grade Lecavalier yet because this is a new era, but he'll surely have to be better this time around. One plus: Lecavalier was the Eastern Conference's captain in the 2008 All-Star Game. Grade: Incomplete
The Future: The job is Lecavalier's to lose. He's signed through — get this — 2019-20.

Mats Sundin's indecision leaves the Leafs in captaincy limbo. If Toronto's long-time leader does come back, he would likely reassume the role. If he doesn't, there are a few options, such as Tomas Kaberle, Pavel Kubina and Alexander Steen. All would be suitable.
The Future: The name not mentioned above? Matt Stajan. Stajan is a smart player in both ends and has the poise and maturity to handle the Toronto media circus. He's the best choice for the future — and maybe right now.

The Canucks named their goaltender the team's locker room captain, however he's not allowed to wear the "C" on his jersey during the game. It is one of the more curious moves in recent years, especially since Luongo can't carry out the duties of a captain while on the ice. The Canucks will have three alternates: Willie Mitchell will serve as the de facto on-ice captain, given the job of talking to the officials and any other game duties; Mattias Ohlund will handle any ceremonial duties, such as pregame puck drops or maybe opening up a new Home Depot; and Ryan Kesler will wear the third "A." We can't grade Luongo yet, but he's probably he most talented netminder in the league and when he's at the top of his game, it will be difficult for his team to not be inspired by his example. Grade: Incomplete
The Future: Kelser, the youngest of the three alternates, seems to be a good choice. But again, I'm going to go off the board a bit and choose Vancouver's 10th overall pick in this past draft, Cody Hodgson. Hodgson served as Canada's U18 team captain and has all the attributes one looks for in a leader.

Clark has been the Caps' captain since the 2006-07 season, but there's no denying that Alexander Ovechkin is Washington's heartbeat. Clark missed most of last season, the only year of his reign where the Capitals had success and reached the postseason. But while the success on the ice hasn't been there with Clark leading the way, he has been the perfect transitional leader for a bad squad that is really AO's team. Clark is willing to fill any role: scorer, checker or even pugilist. This guy's a true leader, even if his tenure as Washington's captain will likely end soon. Grade: B+
The Future: Easy. This is all Ovechkin.