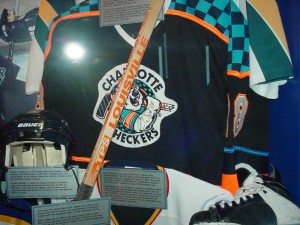 The Carolina Hurricanes and the Society of North Carolina Archivists joined forces to put together an exhibit about the history of hockey in the state. The exhibit should be on display in the concourse of the RBC for the next three games, October 5th, 10th, and 13th.

The Carolina Hurricanes and the Society of North Carolina Archivists (SNCA) welcome you to "The Puck on Tobacco Road," an exhibit about the men and women who have played hockey in Charlotte, Raleigh, Fayetteville, Winston-Salem, Greensboro, and the North Carolina mountains since the 1950s. We invite you to walk around the RBC Center concourse in order to learn about different aspects of the North Carolina hockey tradition.
The exhibit consists of 11 panels of various photos and is being shown to celebrate American Archives Month as well as North Carolina Archives Week. (NC Archives week is actually later in the month, but there are no home games during that week.)

I interviewed the braintrust of the exhibit, Dawne Lucas and asked her who provided the materials for the display. "We received items from a variety of sources, including representatives of the various teams in the state. The Carolina Hurricanes provided some information and also completely funded the project".

Apparently, this project has been ongoing for a little over a year. I also asked Ms. Lucas how the concept got started. "About a year ago, I was thinking that it would be nice to have a display about North Carolina's hockey history. Many people have the perception that hockey is foreign to the south, but there is a rich history in this state. Of course it's not as prevalent as in the north, but there is substantial history. I contacted the Hurricanes with the idea and with their help and other archivists, we started working on the project."

Of course women's hockey is also represented. The North Carolina Trailblazers, which had it's start back in 1995, provided information about their history as well.

"The Puck on Tobacco Road" exhibit sounds very interesting and will probably surprise quite a few people who take the time to check it out. The 11 panels of history should be on display starting today, so take a look for it between periods.

Being a bit of a history buff myself, I would like to congratulate Ms. Lucas and the other archivists who worked on the project, and thank the Carolina Hurricanes for helping to put the exhibit together. Great idea!