During the offseason, the Carolina Hurricanes signed forward Matt Murley to a two-way, one year contract. Murley was originally drafted in the second round in 1999 by Pittsburgh, had 21 goals with 62 points for San Antonio last year, and is an RPI graduate. Fans from Albany were looking forward to watching the hometown boy play for the River Rats this season.

All that is for naught as Murley "pulled an Alexander Radulov" and signed to play for a team in the Russian league this week. According to Times Union reporter Pete Dougherty, Albany coach Jeff Daniels said the player asked to be released from his contract. After the team refused, he bolted for Russia anyway.

The Hurricanes have contacted the NHL about the matter.

Funny how some players seem to feel that contracts are unilateral. Of course if the boot was on the other foot and the Hurricanes refused to pay Murley, I'm sure the skater would feel the contract was 100% binding.

All Along the Watchtower-

In other news, John Forslund mentioned in his blog that the Canes are keeping an eye out on the waiver wire for scoring forwards. There are some possibilities, but it's hard to get very excited about any of them at this point. Teams had until 3PM today to provide their final rosters to the league office, so there might be a couple of late additions this afternoon.

Let's face it, you just don't find a Sergei Samsonov on the waiver wire very often.

Speaking of waivers, the Blackhawks released Kevyn Adams and he is seeking a new home. One has to feel for Adams, but his time has probably come and gone here in Carolina.

The Times They Are A-Changin'-

Apparently, the Tampa Bay Lightning requested that Saturday night's game with the Canes be moved up to a 5PM starting time, so not to overlap the Tampa Bay Rays playoff game. Of course the Hurricanes refused, being that that game is on the tail end of a back-to-back and every hour in between is precious.

Luke weighed in with his opinion and alludes to the fact that the Canes might have said no because of the funky visiting locker arrangements in the forum.

Bottom line, I just don't think the Canes want the inconvenience of changing times. Hockey players are creatures of habit and while a couple of hours might not seem like much, it is a major change to a player's routine, especially on the back end of a "two games in two nights" scenario.

Blowin' in the Wind- 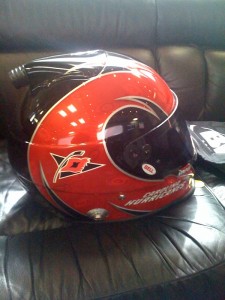 Finally, it was reported yesterday that NASCAR driver Regan Smith will be sporting a Hurricanes themed helmet for the big race in Charlotte on Saturday night. Smith races for the Dale Earnhardt Racing Team and will donate the helmet to the Kids "N Community Foundation after the race.

Apparently, he is a self-described "Caniac". Good luck to him on Saturday night.