Share All sharing options for: Paint it Black - Wings at Canes Preview 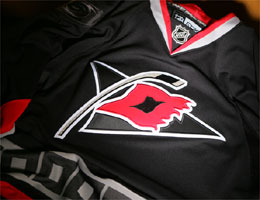 The Stanley Cup Champion Detroit Red Wings are in Raleigh to take on the Carolina Hurricanes tonight as the Canes put their 2-0 record on the line. Detroit is sporting a 1-1 record, having lost to Toronto in their home opener and then beating Ottawa the following night.

The Hurricanes will be donning their new black, third jerseys tonight.

I had a chance to speak with Tuomo Ruutu this morning and asked him if his ailment from the preseason was still bothering him at all. "I feel great!", Ruutu said. "No problems at all. I wouldn't have come back unless I was 100%. There are always little things that come up in the season, but right now I feel great."

When asked how he felt being moved to the Staal/Whitney line during the last game, he laughed. "Oh yes, those are good guys to play with, you know. I'm fine with it. But I was fine on the other line too. It's early in the year and I think the coach is trying to find the right combinations".

I asked Joni Pitkanen if he was feeling comfortable with his new teammates and how he felt about his play so far this season. "I'm feeling pretty good right now. We've had two wins, two pretty good games. I feel happy with the offense part of my game, but need more improvement on puck moving, especially when they send a two man forecheck, we need to move the puck faster. But it's still early, we just played two games".

Pitkanen should be feeling pretty comfortable since he leads the team with ice time and is also tied with the NHL leaders in plus/minus with a plus 4. Eric Staal also has plus 4.

I followed up by asking what the Canes needed to do to beat Detroit tonight and he replied, "We have to skate. We can't turn the puck over, we need to get it deep. Also, we need to come out and skate in the first period and try to get the early goal".

Seems like the youngster has a good grasp of what needs to be done.

Look for the lines to start out the same as they ended up Saturday night.

I would also expect to see changes throughout. For instance, perhaps Sutter might take some time as third line center and Staal and Cullen might be double shifted.

The Hurricanes certainly do not want to start this game the same way that they have in the past two games, behind by multiple goals. The boys in black will probably come out with more energy in the first period than they have in their previous two.

This is the third game in four nights for both clubs, so they are on even footing in that regard. This will be the last home game this month for the Canes, who leave town later this week for the west coast. The game starts at 7, you probably don't want to miss this one.