Share All sharing options for: Canes Find a New Way to Win 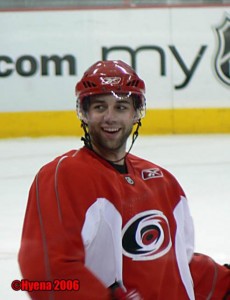 The Carolina Hurricanes defeated the Anaheim Ducks by a score of 3-1 last night in Anaheim. The Canes scored first in the contest, the only time they have done that all season.

Eric Staal zipped a pass across the crease to a wide open Ryan Bayda, who made no mistake. The team came out with a lot of jump and controlled play for most of that period.

The second and third periods were different stories though.

Anaheim controlled play and held the puck in the Carolina zone for most of the final two periods, out-shooting the vistors 22-10 in the process. It seemed like the Canes were killing penalties for much of the time, even when technically, they were playing at even strength.

After the Ducks had controlled play and tied the game up, Rod Brind'Amour was able to get behind the defense and slip a goal past Giguere late in the period.

Hockey is a strange game sometimes. The Ducks had been peppering Michael Leighton with shots and controlling play in the Hurricanes zone most of that period, but the goal by Brind'Amour almost seemed easy.

In the third period, the Canes were hanging on for dear life as they continually had trouble getting the puck out of their own zone. Michael Leighton made several key saves and the defense helped out as well.

Dennis Seidenberg had an outstanding game. The defenseman led the team with three blocked shots, saved one sure goal when his goalie had slipped a bit out of position, and was a physical presence when needed.

Nic Wallin also had an excellent game. Not only did he have two assists for the second consecutive game, he also led the team with four hits and was defensively solid in his own end.

Eric Staal scored an empty netter near the end of the game as he attempted to clear the puck from his own red line during a flurry in front of the Carolina net.

The Canes will take the two points even though they didn't measure up statistically in the game. They were out-shot 33-23, out-hit 25-12, lost faceoffs 31-24, and definitely lost on time of possession.

Michael Leighton was the first star of the game and probably earned himself another start against Pittsburgh on Thursday.

A win is a win and although it wasn't pretty, taking three out of four points on a west coast roadtrip is nothing to complain about.

Michael Leighton played very well and as Tripp Tracy pointed out, looked calm, cool, and collected in net, even while under extreme duress.

As mentioned before, Seidenberg, Wallin, and Gleason had excellent defensive games. It seemed like the forwards were dropping back better to play defense as well.

Wallin's five assists so far this season almost matches his total from all of last year. (6).

The team came out with jump from the start and got the all important first goal of the game.

The penalty kill was excellent as Bayda, Sutter, and Staal continued to shine.

The team seemed to work hard and showed good effort, even if it didn't always translate to successful plays on the ice.

The powerplay still looks disjointed. The Canes couldn't even get a play set up during a 30-40 second chance with a 5-3 advantage.

They continually have trouble getting the puck out of their own zone for prolonged periods of time.

They have dangerous turnovers in their own end.

All in all, it has to be considered a successful two game road trip because of the net result. The Canes will take a travel day today and will be back to work at practice on Tuesday.