Share All sharing options for: Carolina at Montreal - Pregame 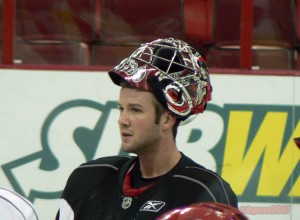 The Hurricanes continue with game five of their six game road trip tonight and will take on the Montreal Canadiens at the Bell Centre.

The Canes are sporting a record of 4-2-1, (3-1-1 on the road), while the Habs are 5-1. The Habs are coming off their only loss of the season against the Ducks, while the Hurricanes come into town with a one game winning streak as they beat the Islanders 4-3 on Saturday night.

Carolina has scored 22 goals but has also allowed 22. Montreal has scored 27 while allowing just 17.

The Hurricanes always seems to do well in Montreal and have yet to lose a game there since the lockout. (9-0). Cam Ward especially loves it there and has a lifetime record of 7-0 at the Bell Centre with a save percentage of .952 and a GAA of 1.42.

He will need a typical performance tonight because the Canadiens are one of the top teams in the league and the Canes will be playing short-handed.

Of course Brandon Sutter is resting in Raleigh and is out indefinitely. Joni Pitkanen had minor knee surgey and will be out for a month. Those two players join Scott Walker, Frank Kaberle, and Justin Williams on the IR.

Who is tied for the lead in the entire NHL with a plus 9 rating?..... Nic Wallin.

None other than Ryan Bayda is second on the team with a plus 6.

Dwight Helminen will be making his NHL debut, always an exciting event.

Cam Ward improved his save percentage from .891 to .914 with his 57 save performance on the Island.

Tonight is the 300th game with the Hurricanes for coach Peter Laviolette.

Patrick Eaves has just six shots on goal in seven games. Eric Staal (30 shots on the season) has had more than that in a game twice this season. Staal also has 15 missed shots to Eaves' four.

The Canes are allowing 35.7 shots a game, which is inflated by the 60-shots-against effort vs. the Islanders Saturday. Still, that ranks 28th in the league. Only Southeast rivals Atlanta (36.2) and Tampa Bay (37.3) are worse. Also, Florida is just ahead of Carolina at 34.9, making the bottom four teams in shots against all from the division. Washington, the Southeast's other team, is eighth at 27.5.

Game time is at 7:30 and there is no local television. Find a cozy spot with Center Ice and either synch your station to listen to Chuck, or bring your French dictionary, the broadcast will be in French tonight.