Have Suitcase, will Travel - Shanahan for Hire

Share All sharing options for: Have Suitcase, will Travel - Shanahan for Hire 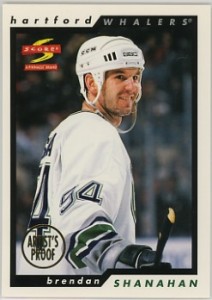 According to Larry Brooks, the ex-Whaler has officially given up waiting for the New York Rangers and is looking for a new home.

I've told Rick [Curran] that I can no longer wait and that it's time to move on," Shanahan, referring to his agent, told The Post this afternoon. "Until now, Rick has been under instructions to tell inquiring teams that my focus was on re-signing with theNew York Ranger Rangers and that I was not accepting any other offers.

"That has changed."
I'm sure Curran's phone is ringing off the hook. Although who knows, maybe Tampa Bay needs another forward?

In other news, the Florida Panthers recently laid of 10 people and are having financial difficulties. According to George Richards of the Miami Herald, the team stopped matching 401K contributions and has even forbidden overnight mail delivery.

Are these cutbacks going to give the team more resources to negotiate with upcoming free agent Jay Bouwmeester?

Did Forbes Magazine miss this news?

I'll have the pre-game hype up for the Blues game after lunch.