Share All sharing options for: Wallin Lifts Canes over Leafs in OT, 5-4 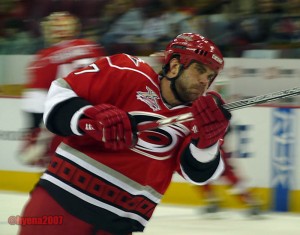 The Carolina Hurricanes jumped out to a big lead in the first period, but then held on for dear life to force overtime as they defeated the Toronto Maple Leafs in the extra period, 5-4. It was another Jekyl and Hyde performance for the team as they looked like world beaters in the opening period, but then stood around and watched for much of the rest of the game as the Leafs dominated play.

Tuomo Ruutu opened the scoring just two minutes into the game. About three minutes later, Dennis Seidenberg fired in a shot from the point on a powerplay, the third game in the last four that the Canes have scored with the man advantage.

Chad LaRose then banged in a shot from close range, and Ryan Bayda completed the first period barrage as he buried a picture perfect pass from Ray Whitney.

The Maple Leafs didn't give up though and carried the play in the Carolina zone for much of the rest of the game. Mikhail Grabovski scored two goals and has had a career just playing against the Canes. He has scored four of his five goals scored this year in the past two games against Carolina.

A key point of the game was in the third period. The score was tied 4-4 and the Hurricanes were called for two consecutive penalties, giving the Leafs a two man advantage. But the Canes penalty killers were up to the challenge and the momentum shifted a bit back to Carolina after the kill.

Nic Wallin was the hero in overtime as he ripped a shot past Toskala for the game-winner. Sergei Samsonov started the play by controlling the puck behind the neck. After he fed it to Tuomo Ruutu, the Finn found Wallin all alone and the defenseman just "shot it like he always does".

Wallin has to be the unsung hero of the young season so far. He is tied for the NHL lead with a plus 10. He's been a force on defense with partner Dennis Seidenberg, and he has also chipped in seven points so far on the year, higher than his total for all of last season. Not bad for a defense-first defenseman.

It's a bit funny that the "offensive defensemen", Joe Corvo and Joni Pitkanen have four points each and have been outscored so far this season by Wallin, Seidenberg, and Gleason. Of course Pitkanen has been hurt, but much credit has to be given to all the blueliners for picking up their respective games.

The Canes had their best start so far this season and looked like they might blow the Leafs right out of Canada.

Cam Ward was voted the number one star of the game and even though he allowed four goals, actually deserves some credit for keeping the Canes in it during the second and third periods when the team was under seige in their own end.

Carolina continues to get balanced scoring which makes them tough to play against.

The team was able to re-group and put together a surge when they needed it the most.

Dennis Seidenberg continues to lead the team in blocked shots, plus he chips in on offense. Another good game for him.

The second period was horrible and so was much of the third. Wallin said after the game, they didn't deserve to win that one.

While Nic Wallin has a team best +10, Rod Brind'Amour has a team worst -10. Hopefully, his injury woes will get better sooner rather than later.

Eric Staal has yet to kick his game into high gear.

Next up is Washington tomorrow night, which the Canes are calling the "game of the year" so far. More analysis about that later.