Share All sharing options for: Canes at Caps, Preview

The Hurricanes are in the nation's capital to take on the Capitals tonight in a game between hungry rivals. Carolina is currently in first place in the Southeast Division sporting 16 points while Washington is tied for second with 12.

Neither team is entirely happy with the way they have been playing of late. The Canes are winning more than they are losing, (7-3-2), but have been inconsistent. They are coming off two consecutive wins over Toronto.

The Caps have been disappointed with their effort lately and have a record of 5-4-2. After their 5-0 loss at Buffalo on Saturday night, head coach Bruce Boudreau canceled the off time on Sunday, and scheduled a mandatory ice session with no pucks. He reportedly skated his club into oblivion for about an hour. The team responded with a better effort on Tuesday night in Ottawa, but lost the game in OT, 2-1.

Goalie Brent Johnson was in net for that game and as a reward for a very good game against the Sens, has been given the nod for tonight's game as well. Although according to the Washington Post, Boudreau could be playing the percentages from last season.

Boudreau also might be favoring history by turning to Johnson, who has a career .919 save percentage against Carolina and last season posted a 1.56 goals against average and a .938 save percentage in two appearances against the Hurricanes.


Cam Ward will be between the pipes for the Hurricanes.

The leading scorer for the Caps has been Alexander Semin, who also is in second place in the league with 17 points. Alexander Ovechkin has been in a bit of a slump. He recently missed two games because of a visit back to Russia to see his ailing grandfather. (He returned to action Tuesday and was pointless). Ovechkin has not scored in his last seven games, but will be looking to get back on track against Carolina. Of his 65 goals last season, he scored seven against the Canes, more than any other team in the league.

The Caps will be fired up and will come out flying for this one.

From the other side, the Hurricanes have already noted that this is an important game for them as well. They know they are going up against last year's division champs, and they are looking to send a message.

Ray Whitney leads Carolina with 11 points while Eric Staal has 9. Lately though, the hot players have been Tuomo Ruutu and Chad LaRose. Ruutu has scored eight points in nine games and has one of the highest "points per game" averages on the team.

Scott Walker should be able to play again with the cast on his hand. It's not known how effectively he can stickhandle or shoot the puck, but he is skating well.

Matt Cullen made the trip but is still questionable because of his groin issue. If Cullen can not play, look for the following lines-


If Cullen does play, look for him to take Helminen's spot and for Dwight to slide down to the fourth line in place of Dwyer.

For more Washington perspective, check out Japer's Rink and On Frozen Blog, two of my favorite places to find out about Caps news.

I am making the journey up to DC to work the game and will be away from the blog all day. Cory will be able to keep everyone up to date with any news that surfaces, and perhaps will post more preview tidbits. I'll make another posting from the Verizon Center before the puck drops. 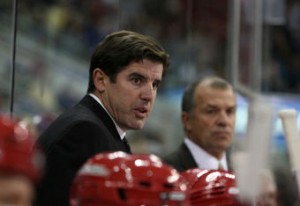 Hopefully, I'll have some brief, post-game interview time with Peter Laviolette if the Canes win and he breaks the record for the most wins ever for an American born NHL head coach. As everyone probably knows, he's currently tied with John Tortorella.

Will coach break the record? Will the Ruutu/LaRose/Helminen line continue to shine? Can the Canes extend their division lead or will Ovechkin find his scoring touch and light up Carolina? Will Semin continue to dominate?

Game time is at 7PM.