Share All sharing options for: Sens Come To The RBC; Michael Ryan Recalled

[caption id="attachment_2287" align="alignright" width="300" caption="Samsonov is looking for his first goal of the season."] 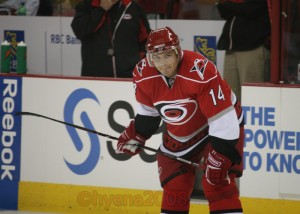 Last night, Ottawa notched a convincing win over the Flyers in Canada's capital. In the U.S. capital of Washington, D.C., the Canes suffered their most crushing loss of the young season.

The Sens have won four of five and head into Raleigh with confidence, creeping back into the early season playoff race after struggling out of the gate. For Carolina, tonight will be a huge game that will either lessen the pain of Thursday's disaster or put the Canes on a slippery slope of waning confidence.

Ottawa can thank Alex Auld for their resurgence. He's started seven straight games since Martin Gerber went down with an injured leg, going 5-2-1 and propelling the Senators back in the hunt. But it will be Gerber tonight. The Ex-Carolina netminder is 1-3-1 on the year with a 3.39 goals-against average and .891 save percentage.

The good news for Carolina is they haven't gone two games without getting at least a point and have won two out of two when faced with the back-end of consecutive games this season. The bad news is they've yet to put together a full 60-minute effort this season and it has cost them several times already.

There are a couple of interesting subplots tonight.

Joe Corvo and Patrick Eaves — who were acquired before the traded deadline last season for Cory Stillman and Mike Commodore — will face their old team. Corvo had a hat trick at the RBC Center March 16 in his first and only game against the Senators since the trade. Eaves also scored in the 5-1 Carolina win.

The matchup of brothers Tuomo and Jarkko Ruutu should be fun. Tuomo has points in five straight games (three goals, six assists) and Peter Laviolette's combination of him, Dwight Helminen and Chad Larose has provided the secondary scoring and pressure that was missing early in the season. Larose has two goals and two assists since the line was formulated three games back, and Helminen has a goal and an assist plus numerous solid chances. The 33-year-old Jarkko is an agitator extraordinaire who gets under the skin of his opponents rather than filling up the score sheet.

As for scoring, there's plenty to worry about on Ottawa. The combination of Dany Heatley — who has goals in five straight — and Jason Spezza is one of the league's top duos, having combined for 28 points (14-14-28) in 13 games. Heatley also has scored in five straight vs. Carolina, potting six in that span. Daniel Alfredsson finds himself on a line with Mike Fisher and rookie Jesse Winchester — who had his first NHL goal last night — with the hopes that the Sens can find a combination that gives them two lines that can consistently threaten to score.

The biggest surprise for Ottawa has to be new blueliner Filip Kuba. Acquired in the trade that sent Andrei Meszaros to Tampa Bay, Kuba already has 14 assists for his new team, just 11 assists shy of his career-high of 25 he got with the Lightning last season. He's also tied with Shean Donovan for the top plus/minus rating on the Sens at plus-5.

The Canes recalled Michael Ryan from Albany and made for room for him by moving Brandon Sutter to injured reserve. Ryan had a goal and two assists in two games with the River Rats since signing with the Canes. Unless there's a new injury we don't know about, I can only assume this means Wade Brookbank will be scratched tonight since Ottawa doesn't have a heavyweight fighter on their roster. LSB has a post about Sutter's recovery, which is seemingly going well.

The return to the RBC Center marks the first game of an eight-out-of-10 home stretch for Carolina. There is no local television broadcast tonight, but the game can be heard on 99.9 FM. Game time is 7 p.m.

• Six of Heatley's nine goals this season have come on the power play. Only Teemu Selanne (eight) and Keith Tkachuk (seven) have more tallies with the man advantage. Heatley tallied four goals and two assists in three games vs. the Canes in 2007-08. Spezza, his linemate, was also dominant against Carolina last year with two goals and six assists in four outings.

• Rod Brind'Amour is now tied for first in the NHL in faceoff percentage. He and St Louis' Andy McDonald have won 63.4 percent of their draws.

• Eric Staal had one goal and six assists in four games vs. Ottawa last year. Staal and Spezza trail only Dion Phaneuf in missed shots this season. Both have 25 to Phaneuf's 26. Staal is also fourth in the league in faceoff losses with 138. His winning percentage is 43.2 percent. Only Philadelphia's Jeff Carter (42.1) has a lower winning percentage among the 29 players with 200 draws taken.

• Chris Neil's 43 penalty minutes are the sixth-most in the league.

• Fight card: Scott Walker and Mike Fisher tangled Dec. 12 of last season. The fight cost Walker more than a fighting major — he was suspended one game for head butting Fisher as the refs were breaking up the brawl. Fisher scored three times in four games against the Canes last year.

• Alfredsson had just one assist in four games against the Hurricanes last year.

• The Sens are tied for the third-worst total of first-period goals with just nine on the year, but have also allowed just eight in the first frame — tied for fourth-best in the NHL.

• Chad LaRose had three assists in three games vs. the Sens last year.

• Anton Volchenkov and Jason Smith are seventh (35) and tied for eighth (32), respectively, in blocked shots. Dennis Seidenberg it tied for third with 38.

• Cam Ward was 2-2 last year against Ottawa. Backup Michael Leighton has one career game vs. the Senators. On Dec. 18, 2003, he lost 6-1 while playing for Chicago. Tuomo Ruutu was minus-1 in that game for the Blackhawks.