The Rangers Want A Pick

Share All sharing options for: The Rangers Want A Pick 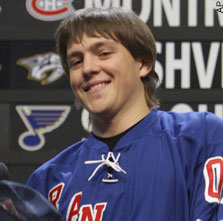 The New York Rangers have asked the NHL for a compensatory second-round pick in the 2009 draft. Why? Alexei Cherapanov's untimely death may have exposed a loophole in the CBA. From the Rangers:

"The question is with the one parenthetical phrase in Article 8.3 (b) that refers compensation for an unsigned first-round draft pick who is '… again eligible for the Entry Draft or becomes an Unrestricted Free Agent,'" Rangers assistant general manager Cam Hope told the newspaper. "That language was inserted to clarify that a team would be owed a compensatory pick even if they were to re-draft that player or sign him as a free agent.

"It seems now as if that phrase is unintentionally precluding the deceased from being included as eligible for compensation. We understand that this is a sensitive issue, but with all due respect to Alexei's family and his memory, he is technically eligible to be drafted again next year."

There's no denying that this tragedy is a blow to the Rangers on the ice. They lost a potential superstar forward and, it appears, they do indeed have a case in getting the pick. But is this the proper way to handle this? Should this be in the news less than a month after Cherapanov suddenly collapsed and died?

Leave us your thoughts and comments.