Share All sharing options for: Thrashers And Canes Meet For First Time 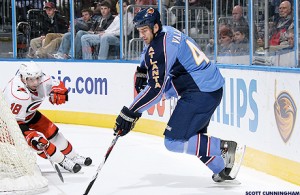 Atlanta comes to Raleigh for the first of six meetings this season between the Southeast Division foes. Carolina owned the Thrashers last season, going 6-1-1 in the eight-game slate. It will be the Canes' first time facing new Thrashers head coach John Anderson.

Both teams are coming off big wins Friday, with Carolina coming from behind to beat Ottawa at the RBC Center 2-1, while Atlanta erased a Buffalo lead in the third period and won in overtime on a Jason Williams power play goal.

I'll try and leave comments tomorrow afternoon with the specifics about who will be in net (early reports say Kari Lehtonen will man the crease for Atlanta; I'm guessing Cam Ward will get the nod for Carolina), and any possible lineup changes (Matt Cullen practiced today; maybe he plays? Patrick Eaves did not skate with the team today).

The newest Thrasher, 39-year-old defenseman Mathieu Schneider, was not expected to make the trip with a hip flexor injury. Rookie Boris Valabik was called up a few days back and will play in his place. Valabik, at 6-7 and 240 pounds, played seven games with Atlanta last season — twice against Carolina — and is probably best remembered by Canes fans for piling up 29 penalty minutes for going after Joe Corvo — who, by the way, is on a four-game point streak — and starting a brawl in the waning minutes of the Hurricanes' 7-1 win March 28. He's accumulated 200-plus penalty minutes in four of his five full seasons in North America (he spent three years with the OHL's Kitchener Rangers and this is third in the Thrashers' organization, playing mostly with the AHL Chicago Wolves).

Surprisingly, Kovalchuk (5-7-12, minus-3) is only fourth in Thrashers scoring early in the season. Leading the way is center Todd White with four goals and 11 assists in 14 games, followed by veteran Slava Kozlov and second-year center Bryan Little, who both have eight goals and six assists.

Unfortunately, neither the Canes' or Thrashers' broadcast partners are televising the game, but you can listen in on 99.9 FM (streaming audio on top right of page) starting at 2:30 with a half-hour pregame show, with the game broadcast beginning at 3 p.m..