The Carolina Hurricanes played a regular season hockey game against the Atlanta Thrashers Sunday afternoon. Apparently, it was not a very important game. It certainly wasn't important enough for either team to have it televised for their fans.

One might think that the NHL would realize that "big league" games need to be televised by one team or the other, in one way or the other, but apparently the big wigs don't care.

More about that topic later.

The game started out pretty well for Carolina as they out-shot the Thrashers 15-10 in the scoreless first period. But while the Canes dominated the time of possession and shots on goal categories, Atlanta goalie Johan Hedberg was equal to the task.

Peter Laviolette mixed up the lines a bit. He moved Tuomo Ruutu up with Eric Staal and Ray Whitney. Rod Brind'Amour was matched with Sergei Samsonov and Chad LaRose. Dwight Helminen centered a line with Ryan Bayda and Scott Walker. The energy line was comprised of Wade Brookbank, Pat Dwyer, and Mike Ryan.

The most notable event that occurred in the period was an altercation between Brookbank and Eric Boulton. Unlike the fiasco in Washington, Brookbank got his money's worth in this bout as he stood toe-to-toe with the Atlanta heavyweight and dished out as much as he took. Neither combatant left their feet as the linesmen jumped in after both skaters eventually wore themselves out pummeling each other.

The second period was the deciding one as a total of six goals were tallied.

The Canes opened the scoring when Rod Brind'Amour took a nice pass from Sergei Samsonov and shoveled the puck past Hedberg.

But just two minutes later, Marty Reasoner evened the score. After Josef Melichar lost the puck attempting to carry it over the blueline, Chris Thorburn scooped up the puck and hit Reasoner with a pass who had an open chance against Cam Ward. The puck hit the Hurricanes goalie up high and it ended up rolling over him and into the net.

About two minutes after that, Tuomo Ruutu found Ray Whitney streaking toward the Atlanta zone and hit him in full stride. Whitney buried a perfect shot high on Hedberg's glove side to give the Canes the lead one more time.

But after that it was all Atlanta, on the scoreboard anyway.

Ron Hainsey fired in a shot from the blueline, Jason Williams potted a powerplay goal from the slot area, and Ilya Kovalchuk added one right at Ward's doorstep as the Thrashers skated into the second intermission with a 4-2 lead.

During the intermission, several people were wondering if Laviolette would switch up goalies. Cam Ward had allowed 4 goals on just 19 shots, but even if you don't pin the blame on the goalie sometimes a change in net can help ignite a team. The Canes definitely needed some type of lift, but they didn't get it. 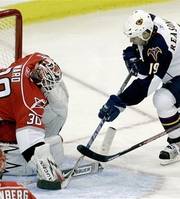 Cam Ward returned in the third and the good news is that he only faced three more shots in the entire period. The bad news is that he allowed another goal. About six minutes into the third, Rod Brind'Amour lost control of the puck along the boards. Marty Reasoner took it and broke in on Ward. He stretched the goalie out and before you could say "uh-oh, Wardo", put it past him, assuring Atlanta of the win.

You can blame the goal on Brind'Amour or you can blame it on the goalie, it really doesn't matter. The score sucked any hope out of the Carolina bench and the game was as much as over at that point.

The Canes did have two powerplay attempts later in the third, but were unable to get anything going and did not come close to scoring.

After the game, Coach Laviolette stated that the team didn't have enough jump. It's not the first time that he has said that in his post-game press conference. What can be done to fix that?

The organization seems to be tripping over themselves in defense of Cam Ward. Before the game on "The Fan", Chuck Kaiton told Mike Maniscalco that there was no goalie controversy, Cam Ward was number one.

After the game, John Forslund and Mansicalco both were calling out the highly paid "stars" of the team, especially Eric Staal, but didn't say much about Ward.

Many fans disagree and feel that there should be a goalie controversy, if there isn't one. They want Michael Leighton to have a fair chance to be the number one. The statistics seem to make a good argument for that case.

These numbers include Ward's 5 goals allowed on 22 shots on Sunday.

Who will start Wednesday's game against the Capitals? More about the "non-controversy" later.