Share All sharing options for: All-Star Campaign Started for Wallin 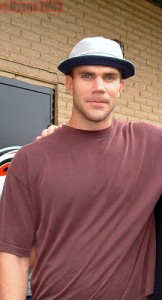 The NHL All-Star nominations have been announced and several familiar names are on the ballot. Representing the Hurricanes are team leaders Ray Whitney, Rod Brind'Amour, and last year's All-Star MVP, Eric Staal.

Recently, I was informed that some fans are looking for even more possible representation from the Canes.

One of the pleasant surprises this year has been the play of blueliner, Niclas Wallin. Not only has he provided dependable, physical, defensive play in his own end, he has contributed more than ever on offense so far this season.

Wallin has one goal and six assists in 15 games this year, compared to a total of two goals and six assists in all of last season. (66 games). His NHL career high for one season is 10 points, so the defenseman is on pace to shatter his previous career best.

Up until recently, Wallin had also been flirting with the best plus/minus stats in the entire NHL. He leads the team and is among league leaders with hits. Most importantly, "The Secret Weapon" (as he was dubbed by John Forslund), has tied an NHL record for defensemen with three OT game winning goals in the playoffs.

Someone created a special page for Wallin and several fans over on the forums at Carolina Hurricanes.com have started a buzz. Can he get enough votes to make it? At the very least it would show the rest of the NHL that there are more than just a few passionate, southern hockey fans if they can generate several thousand "write-in" votes for the Swede.

Good luck to him and best of luck to the fans on this crusade.

Happy Veteran's Day to all my fellow vets out there.

Question for Canes tickets giveaway- worth 10 Canes Country points- (100 points needed to win free tickets. First one to post the correct answer in the comments section below will be awarded the 10 points)

Which NHL team has Nic Wallin scored the most career points against in the regular season?