Share All sharing options for: Corvo on "Canes Corner" Tonight 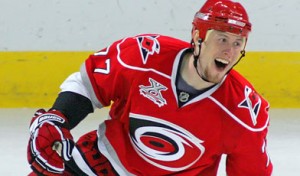 Carolina Hurricanes defenseman Joe Corvo, once dubbed "Uh-Oh" Corvo by the (highly attentive) Ottawa media, is having a very solid year so far for the Hurricanes. The blueliner, who has three goals and four assists in 19 games this season, will be the guest on Mike Maniscalco's "Canes Corner" tonight at 7PM.

The show will be broadcast live from the Falls Taproom in North Raleigh. Fans can either go to the restaurant and see it in person, or they can listen to it on 99.9 "The Fan".

Corvo has been an invaluable addition since his arrival from the Senators. He's capable of playing either in the top pairing or second pairing, depending upon where he is needed. He's also one of the team's best options for the point on the powerplay.

Primarily known for his offensive prowess, remarkably, the defenseman has never had an NHL season with a negative, plus/minus rating. He is +2 at the moment.

All of these positive attributes makes you wonder how he could have gotten his dubious nickname from the Ottawa elitists. One thing for sure, you can tell that Corvo enjoys lighting up his old team. He tallied his first ever hat-trick against his old mates last year, and has scored a game-winning goal against them so far this season.

Now when these same journalists see him with the puck approaching the Ottawa zone, they are probably saying "Oh No" Corvo.

One interesting tidbit. Corvo once was a guest security guy on the Jerry Springer Show. I wonder if he had to break up any fights? Who knows, he might just have another gig lined up whenever he decides to leave the game of hockey.

Quick trivia for 10 points to the first person with correct answer.

What jersey number did Corvo wear when he first played with Los Angeles as a rookie in 2002-03?