Laviolette Given a Vote of Confidence

Share All sharing options for: Laviolette Given a Vote of Confidence 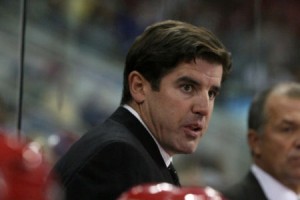 Most fans thought, (and a couple of sportswriters as well), that head coach Peter Laviolette might have been on the brink of being fired last week, back when the Hurricanes were in the midst of a three game losing streak.

Nothing could have been further from the truth, according to general manager, Jim Rutherford.

"With what our team’s gone through with the number of injuries and what not, to consider making any changes early in November I think would have been way premature", said Rutherford.


The Carolina boss has never been one to act too swiftly, or prematurely. Although he did allude to one concern that many fans have, the constant juggling of the lines.

I think Peter [Laviolette] sticking to the lines now and the defense pairings gives us more consistency and gives the players more time to work together with each other and work out whatever issues they may have," he said. "Now, it’s starting to show."


Hopefully, the GM and coach are finally on the same page with this subject matter. It's no accident that scoring has been down during the same time frame in which the lines were being switched around. At one point or the other, Eric Staal has been on the same line with almost every other forward on the roster.

Of course, the constant barrage of injuries has not helped with the line inconsistencies, but the team is hoping to put that problem in the rear view mirror.

In any event, it appears that Laviolette has been given a new lease on his coaching life, at least until the next losing streak.