Share All sharing options for: Familiar Foe: Olli Returns To RBC With Coyotes 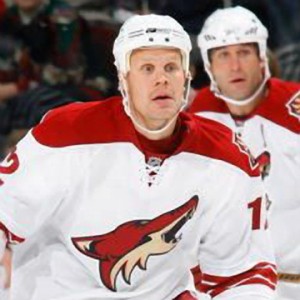 Carolina will be looking for its first three-game winning streak of the season when the Phoenix Coyotes visit Raleigh tonight at 7 p.m. The game is the third of four straight home games for the Hurricanes, who won the first two games of the home stand, managing a 3-2 shootout win over Tampa Bay on Sunday and a 2-1 come-from-behind victory against Montreal on Tuesday. The Coyotes (8-8-1) are coming off their first overtime game — they were the final team to make their first OT appearance — of the season Tuesday, a 3-2 loss at home against Chicago. The loss was the third straight for Phoenix and the game tonight will be the first of a four-game road trip. They have struggled to score on the road this year, managing just 18 goals in eight road contests, compared to 24 goals in nine games at home.

The Coyotes are led by coach Wayne Gretzky, who — justifiably — draws a crowd and cheers wherever he goes. Gretzky leads a team mixed with established veterans and emerging youngsters. Most recognizable to Canes fans will be center Olli Jokinen, who was traded from Southeast foe Florida in the offseason after seven productive but disappointing seasons with the Panthers. Jokinen has been a Cane killer during his career, scoring 20 goals and adding 32 assists in 50 career games vs. Carolina.

The player to watch, however, is captain Shane Doan. After a few seasons of slow starts and strong finishes, Doan has burst out of the gate and is among the league leaders in goals (tied for ninth with 10), hits (60, tied for fourth) and points (tied for 22nd with 18) prior to Thursday's games. Doan is one of the more underrated players in the league; a Jarome Iginla-type who will hurt his opponent with a hit, timely goal or — if needed — a one-on-one brawl. The Coyotes' captain has also been the team's best road player this season, scoring seven of his 10 markers away from Jobing.com Arena. Only rookie Mikkel Boedker (selected eighth in this year's draft) and veteran Steven Reinprecht have managed more than one goal on the road for Phoenix, each with two on the season.

Speaking of Boedker, he's one of several young forwards that make Phoenix a must-see team. Second-year winger Peter Mueller (5-7-12 on the season) may remind some of a poor-man's Eric Staal. He has good size and is an emerging elite point-producer. Kyle Turris, the third overall pick in the 2007 draft, has struggled to put up points early in his career, but his talent is evident on every shift. Rookie Kevin Porter, who won the Hobey Baker Award playing for the University of Michigan last year, plays with a poise and intelligence well beyond his years. Martin Hanzal, who has recently been centering Porter and Boedker, is big and immensely skilled like Mueller but has lacked consistency and drive early in his career. Daniel Carcillo is pointless on the season but had 24 points in 57 games last year and will also drop the gloves if needed. Boedker (5-4-9 on the season) is a darkhorse rookie-of-the-year candidate, and Phoenix's other first round pick this year, Russian Viktor Tikhonov, has found a spot on the fourth line.

Reinprecht, Doan and Jokinen are the best veteran forwards on the teams, with pugilists Todd Fedoruk and Brian McGratton providing toughness. The two tough guys were centered by Tikhonov Tuesday. Grinder Daniel Winnik likely won't play due to injury.

On defense, Ed Jovanovski and 25-year-old Zbynek Michalek have been Gretzky's two best rearguards through 17 games. Young Keith Yandle is being guided by graybeard Ken Klee (funny quote by Yandle here), who is with his third team since late December, having been traded from Atlanta to Anaheim in the Mathieu Schneider trade, then claimed off waivers by Phoenix in late October. Veterans Derek Morris and Kurt Sauer make up the other pairing.

In net, Ilya Bryzgalov is expected to start. He has been a godsend for the Coyotes since he was claimed off waivers from the Ducks last season. In 15 appearances this year, Bryzgalov is 7-7-0-1 with a 2.53 goals-against average and .917 save percentage. Backup Mikael Tellqvist, who is expected to start Saturday at Philadelphia, is 1-1 in two appearances. For the record, Tellqvist has had success vs. Carolina in his career, going 3-1-0-1 with a 1.77 goals-against average and .943 save percentage in five outings.

For Carolina (10-7-2), the last two wins — particularly the start-to-finish effort against the Canadiens — have been refreshing. Sergei Samsonov finally notched his first goal of the season in the Montreal game, and Cam Ward had another solid performance in the win. But the main theme remains the scoring struggles of Eric Staal, who has gone eight games without a goal and has just 10 points on the season. He has also managed just one goal and one assist (both on the power play) in nine home games this year. Staal hit the post early in the Montreal game and could use a good bounce to help end the scoring drought.

Both Justin Williams and Frank Kaberle have resumed skating, with Kaberle close to returning. It was the first time this season the entire roster skated together in practice, a sign that a team that has been ravaged by injuries the past few seasons may finally be getting healthy. Joni Pitkanen and Matt Cullen will be playing their fifth game since returning from injuries, while Brandon Sutter (fourth game back) and Patrick Eaves (third game back) should be rounding into shape.

• Michalek and Dennis Seidenberg are among the league leaders in blocked shots. Prior to Thursday's games, Michalek led the league with 59 blocks, while Seidenberg was third with 54. Michalek was also tied for 13th in plus/minus at plus-8.

• Phoenix is the worst faceoff teams in the league, winning just 43.8 percent of their draws. The next worst is Buffalo at 46.2 percent. Carolina is 14th (50.4). Reinprecht is Phoenix's best faceoff man, yet has won just 50.6 percent of his draws. Jokinen is among the league's worst, winning just 94 of 236 faceoffs for a 39.8 winning percentage. He's been better on the road with a 44.6 percent mark. The team has won just 40 of 116 shorthanded faceoffs (34.5 percent), and Hanzal has taken 65 of them, winning just 26 (40 percent). Rod Brind'Amour leads the way for Carolina at 62.3 percent (second in the league). He is taking 36.9 percent of the Hurricanes' faceoffs, the highest percentage of any player in the league.

• Jovanovski has the lowest shooting percentage among players with a goal this season. He has one goal on 52 shots (1.9 percent). Samsonov has the fourth-worst now that he's in the goal column (one goal on 39 shots; 2.6 percent). Coyotes defenseman David Hale, who has been a healthy scratch of late, has no goals in 227 career games — that's the most games played without ever scoring a goal in NHL history.

• Nic Wallin is minus-4 at home this year, compared to plus-8 on the road.

• All three of Joe Corvo's goals have come at home this season. He has been held pointless in the past five games. He had a four-game point streak before the current drought.

• Six of Tim Gleason's seven assists have come at the RBC Center.

• With an average of 3:58 of shorthanded time, Sutter leads all NHL rookies in that category. Chicago rookie Colin Fraser was second at 3:24 going into the Blackhawks' game last night.

• Mueller's three game-winning goals tie him for second in the league.

• Phoenix is 1-6 when trailing after one period.

• The two teams are among the seven in the league that have not scored a 5-on-3 power play goal. Both teams also have three empty-net goals, tied with Calgary and Pittsburgh for the most in the league prior to Thursday's games.

• Count on Carcillo taking a penalty: the forward has 11 minor and three major penalties in 13 games this season. As a team, the Coyotes have 15 major penalties, compared to eight for Carolina. The last time there was a fight between the teams? More than five years ago! Doan bloodied Josef Vasicek on Feb. 26, 2003. Earlier in that season, Andrei Nazarov and Jesse Boulerice had an uneventful wrestling match on Nov. 12, 2002. So, yes, it's been a while.

I'll have a trivia question in a separate post later.