Share All sharing options for: Staal Breaks Out as Canes Top 'Yotes, 5-2

Wayne Gretzky had a concern. Some fans had a feeling. Team-mates were confident. They all just knew that when Eric Staal got out of his slump, he would do it in a big way. 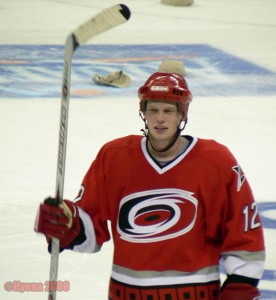 The franchise player is officially out of his scoring slump as he notched his fifth career hat trick last night while Carolina defeated Phoenix 5-2.

The All-Star MVP didn't start out the game as planned though as he picked up a four minute penalty for high sticking just four minutes into the game. Patrick Eaves took another high sticking penalty with 48 seconds still left in Staal's penalty, creating a 5 on 3 advantage for Phoenix.

The Canes penalty killers erased the two man advantage, but were unable to kill the final seconds of Eaves miscue when Kevin Porter tipped in a pass at the crease for a 1-0 Phoenix lead.

The Hurricanes started to apply pressure and finally got on the scoreboard themselves when Sergei Samsonov backhanded a shot toward the net that hit Staal in the chest. The puck fell right at his feet and he knocked it in the net to tie the game.

But Phoenix came right back when Shane Doan stole a pass from Anton Babchuk and rifled it past Cam Ward to give the 'Yotes back the lead. The period ended with the Canes down, 2-1.

In the second period, the Hurricanes picked up the tempo a bit more and were able to create more scoring chances than they did in the previous period. Joni Pitkanen, (who had three assists and was a +4 for the night), flicked a back-handed pass toward the crease and Staal quickly knocked it in the goal to tie the game.

With less than a minute remaining in the second period, Scott Walker made a beautiful pass from behind the goal line and Staal gathered it and back-handed into the net to finish off his hat trick. The goal also turned out to be the game-winner as the Coyotes were finished for the night.

Ray Whitney scored two more "meaningless" goals in the third period, (his words, not mine), and the Hurricanes would complete their first three game winning streak of the season.

It was a solid effort for the team and Cam Ward also played well in goal.

Honorable mention goes to Brandon Sutter who single-handedly took a puck from end to end on a penalty kill and with two men on him, almost scored short-handed. The kid is amazing on the PK. It's too bad he can't win the Calder for that.

Next up for Carolina will be Nashville on Sunday afternoon, as they close out this four game home stand.

I was able to record a couple interviews after the game. The first one is of "Mr. Hat Trick", and the next one is Ray Whitney. "The Wizard" is in rare form as he pokes a little fun at Scott Walker as well as himself.