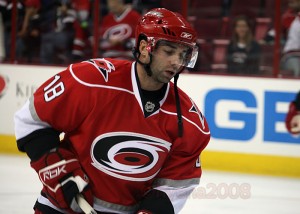 Here are some grades, analysis and projections for the everyday players on the Carolina roster after 22 games. Grades will be based on mostly expectations, rather than overall skill level and stats. Projections are based on the player's current statistics and assume they remain healthy. We'll look at the forwards today.

Ryan Bayda (22G, 3-4-7, plus-5, 8 PIMs, 16:29 TOI)
Bayda has finally established himself as a full-time NHLer, and he's done it by going all-out every shift on the ice. He's impressed the coaches and fans with his work ethic and has even contributed offensively from time to time. A touch more point production would put Bayda at a perfect score.
Fun stat: Bayda leads all Carolina forwards in blocked shots with 17.
Projections: 11-14-25 • Grade: A-

Rod Brind'Amour (22G, 7-7-14, minus-14, 10 PIMs, 20:16 TOI)
The captain has played in every game this season despite coming off of preseason knee surgery. While he has scored numerous timely goals and continues to dominate in the faceoff circle, Brind'Amour has not yet looked like the player he has been in the past. The big question to be answered is if Brind'Amour is still recovering and rounding into shape, or if, at 38, he's finally slowing down.
Fun stat: Brind'Amour has taken just 39 shots but has seven goals. His shooting percentage of 17.9 percent leads the team.
Projections: 26-26-52 • Grade: C

Matt Cullen (17G, 5-1-6, minus-1, 2 PIMs, 16:06 TOI)
In both his first and recent stint with the Canes, Cullen's time in Raleigh has been marked by both hot and cold streaks. He has been capable of being the best player on the ice for multiple games in a row, but also can disappear from the scoresheet. Cullen started off the season well with a goal in three of the team's first four games but has struggled with injury and inconsistency since.
Fun stat: Cullen's two penalty minutes are a low among the regulars on the team.
Projections: 22-4-26 • Grade: C-

Patrick Eaves (17G, 0-3-3, plus-3, 4 PIMs, 11:26 TOI)
Eaves' first full season with Carolina has been, thus far, a huge disappointment. Expected to contribute as a scoring forward — perhaps on Eric Staal's wing — Eaves has been relegated to mostly fourth-line duty. He is yet to score and hasn't even generated many chances to do so. Some injuries haven't helped his cause either. His plus-3 shows a willingness to be responsible in his own end, but Carolina expects much more out of the 24-year-old.
Fun stat: Maybe this isn't fun, but Eaves has just 19 shots on goal this year.
Projections: 0-13-13 • Grade: F

Chad LaRose (22G, 6-2-8, plus-1, 8 PIMs, 12:59 TOI)
LaRose has done exactly what got him to the NHL: hustle, hustle, hustle. He has been a valuable energy player, though his time on the penalty kill has gone down this season. His six goals have him on pace to double his career-high of 11 set last year.
Fun stat: LaRose's two game-winning goals are tied for the team lead.
Projections: 22-7-29 • Grade: A-

Tuomo Ruutu (19G, 7-6-13, even, 21 PIMs, 17:54 TOI)
This is the Ruutu experts expected when he came to North America from Finland. The rugged power forward has done it all for the Canes: hit, score and hit some more. He's fast become a fan favorite and his intensity has served as a catalyst for the team.
Fun stat: Among forwards with at least 50 hits, Ruutu and his seven goals are only exceeded by Shane Doan (11 goals), Alexander Ovechkin (nine), Dustin Brown (eight) and Trent Hunter (eight) in the NHL.
Projections: 29-24-54 • Grade: A-

Sergei Samsonov (22G, 1-6-7, minus-8, 14 PIMs, 17:01 TOI)
Samsonov's struggles this season are well documented. It took the newly signed Russian 11 games to get his first point and didn't get goal No. 1 until Carolina's 19th game. That being said, Samsonov's effort has never faded, even if his confidence had. He has a goal, three assists and is plus-2 in his past four games. Despite the poor projections and grade below, expect Samsonov's numbers to be much higher come season's end. Now he just needs to get back to shooting more so he can register more goals.
Fun stat: Despite his struggles, coach Peter Laviolette showed confidence in Samsonov. His ice time never dipped below 13:29 in any game this season.
Projections: 3-22-25 • Grade: D+

Eric Staal (22G, 8-6-14, plus-8, 24 PIMs, 22:23 TOI)
Attribute it to big-money pressure (which, technically, he's not getting just yet), injury, or just a plain, old funk, but Staal has not lived up to his ability this season. While he leads the team in goals, two have come on empty nets and five of his eight have come in just two games. That being said, Staal's maturation as an all-around player is evident (illustrated in his team-high plus/minus). But the team needs more out of its franchise player.
Fun stat: The team has scored 31 goals with Staal on the ice. The next closest forward is Ray Whitney with 23.
Projections: 29-22-51 • Grade: C+

Brandon Sutter (14G, 1-3-4, even, 4 PIMs, 12:24 TOI)
While his ice time would lead one to believe the Hurricanes' have eased Sutter into his first NHL season, that's certainly not the case. The rookie has been Carolina's No. 1 forward option on the penalty kill, and Laviolette has not been reluctant to put Sutter in the game in key situations. There are things to be improved on — faceoffs, for one — but the Canes' brass must be thrilled with their 2007 first-round pick.
Fun stat: Sutter leads all rookies with 3:33 of shorthanded ice time per game.
Projections: 5-15-20 • Grade: A-

Scott Walker (11G, 2-4-6, minus-4, 8 PIMs, 15:49 TOI)
Since returning from a hand injury, Walker has exhibited the same grit and effort he has his entire career. Like Ruutu, his hits and forechecking have provided a spark in what many nights has been an otherwise uninspired team performance. The whole team could take Walker's play as an example of how to show up each night.
Fun stat: Five of Walker's six points have come at home (seven home games, four road games).
Projections: 12-25-37 • Grade: A-

Ray Whitney (22G, 7-10-17, minus-4, 4 PIMs, 19:20 TOI)
Whitney has quietly had a good start. He's on pace for a similar statistical season as last year and has cut down on the obstruction penalties that have been an issue the past couple years. Most importantly, he's remained healthy in the early going. Still, he hasn't been as visible and dynamic as the past few seasons, despite similar output.
Fun stat: All seven of Whitney's goals have come at home while seven of his 10 assists have come on the road.
Projections: 26-37-63 • Grade: B+

OVERALL FORWARD GRADE: C+
While there are plenty of forwards living up to what they're capable of, the team's best front-line players have, for the most part, struggled through 22 games. Without improved scoring from Staal and Cullen, better all-around play from Brind'Amour and Samsonov, and some kind of contribution from Eaves, the Canes could find themselves on the outside looking in come playoff time for a third straight season.