For the eighth game in a row, the Carolina Hurricanes allowed the first goal in a contest and had to play from behind. For the third game in a row, they were unable to overcome the deficit and lost the contest.

Last night's game against the Flyers repeated what's becoming an all too typical scenario for fans. The Canes come out flat in the first period. They fall behind. They pick up their intensity and tie the score, but end up falling short in the end. Sound familiar?

Coach Peter Laviolette sounded like he was getting tired of the same routine. In the post-game press conference he said that he called the team out during the first intermission. He told them that they were playing "pond hockey". He said that one team was playing like they wanted to win, and the Canes were not. He asked the team to start playing with "heart".

Many fans are tired of the same routine as well. From their perspective, it seems like 1400 Edwards Mills Road has turned into a country club. The team does not take pregame skates so that they can save their legs for the game. But the endless stream of slow starts does not seem to justify this decision making.

The Hurricanes had two powerplay opportunities in the first period, but still were only able to muster one shot on goal for the entire period.

The Flyers scored early in the period after the Canes defense couldn't find the puck during a crowded flurry in the crease. The elusive puck ended up rolling out to Simon Gagne, who easily slapped it into the open net. 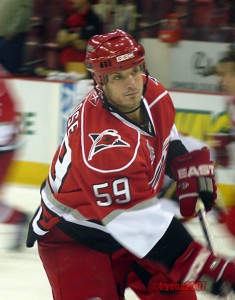 In the second period, the team started skating and pressuring the puck. Less than two minutes into it, Chad LaRose put back his own rebound and tied the score for the Canes. It was the third game in a row that the forward has scored.

LaRose now has seven goals for the season and believe it or not, leads the team in even-strength goals.

The Hurricanes skated well for the rest of the period, but were not rewarded on the scoreboard for their efforts. They started to take more chances in the third and allowed several odd-man rushes to come back against them. Cam Ward did a nice job and made multiple stops.

The defining moment of the game came during an unusual 3-on-3 sequence. Dennis Seidenberg was able to break into the Philadelphia zone with Tuomo Ruutu with an apparent advantage. The defenseman tried to pass the puck to his teammate but the puck was stolen and the Flyers came back the other way.

They turned out to have a 3-on-1 advantage coming back and Simon Gagne passed the puck over to Matt Carle who made no mistake and buried the game winner for the Flyers. The rest of the period was an exercise in futility as the Canes could not seem to put enough serious pressure on the Philly netminder, Antero Nittymaki.

For the second game in a row, the Canes pulled their goalie in the final moments, but could not get a shot on net. The Flyers added an empty netter for good measure, and the game was over.

Some after-thoughts from the peanut gallery-

Congrats to Chad LaRose. Perhaps he should get more ice time, and some powerplay time?

Fans keep hearing that certain star players are nursing injuries and are not playing at 100%. Why not let them rest and heal their wounds, and bring up healthy players who will give 100% in their place?

John Forslund made a good point in the postgame show with Mike Maniscalco. Where is the leadership of this team? Why don't they step up and take charge?

At the end of the second period, Rod Brind'Amour looked very upset and was ready to drop the gloves and go with Flyers captain Mike Richards. It was the most emotion seen from the Hurricanes captain all season and most fans felt that it might carry forward to the third period and might just wake up the team. But apparently whatever transpired between the players was forgiven or forgotten. There was no evidence of any disagreement in the third.

Joe Corvo was on the receiving end of a potentially dangerous hit in the second period. The defenseman was knocked head-first into the endboards by Scott Hartnell, (with no call.) Corvo was incensed and started hitting anything with a white jersey in sight. His intensity carried through the remainder of the game and it was good to see him play with an edge. He ended up tying for the team lead in hits.

Scott Walker pulled up lame and left the game in the first period. It is not known when he will be back.

The Canes, (three game losing streak), and Flyers, (six game winning streak), tangle again on Friday at 1PM in the "City of Brotherly Love". Will both teams add to their current streaks?

Happy Thanksgiving to all who celebrate!