Share All sharing options for: Ducks at Canes Preview

The Anaheim Ducks, (13-8-3) are in Raleigh to take on the Hurricanes, (12-10-2) tonight in yet another Sunday contest at the RBC. The game marks the 5th straight Sunday the Canes will play at home, with one more to go next week against Washington.

The Hurricanes have lost three of their last four, winning their last game in Philadelphia on Friday afternoon. The Ducks have won three in a row, coming off a shutout of Chicago on Friday. The Canes are 6-6 at home while the Ducks are 6-2-1 away.

While Patrick Eaves and Frank Kaberle left the ranks of the injured and rejoined their teammates on the ice on Friday, Dennis Seidenberg tweaked a groin and joined Scott Walker, Tim Gleason, and Justin Williams on the sidelines.

Carolina's powerplay has dropped to 29th in the league at 13.4% efficiency while Anaheim is 8th at 21%. Both team's penalty kill units are performing at about 81% each. 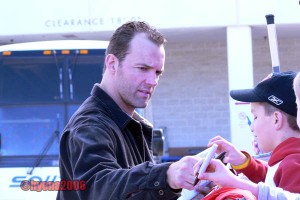 The game will mark the first appearance for Bret Hedican at the RBC since he decided to leave the Hurricanes organization during the offseason. Hedican spent 6 seasons with the Canes and was a big part of the blueline success during the two Stanley Cup runs in 2002 and 2006.

The defenseman had nothing but good to say about his time in North Carolina in a recent interview for the OC Register's Duck's Blog. Here are a few of his best quotes-

"There’s a lot of emotion going into that game," Hedican said. "It’s just like anybody leaving this organization after winning the Stanley Cup … I think when you have trust in an organization, a team, you develop a lot of friendships, a lot of bonds there that are going to last forever."

"I’ve gotten a lot of positive feedback from fans there. They’ve always been good to my wife and my kids. I have nothing bad to say about Carolina. It was just one of those situations where I think I’ve got kids old enough to move back West and get them in school. There’s no hard feelings."

"I still have a ways to go," he said. "I’m still not feeling like I’m the player I should be … I’m trying to contribute right now while I’m going through the growing pains of getting back into it."
For more information, Chip Alexander interviewed Hedican at the Rec Zone this morning after the Ducks pregame skate. (Yes, other teams are continuing the tradition of pregame skates)

Expect soft, choppy ice because NC State will playing a basketball game starting at 2 and the change crew will be hustling to complete the arena makeover before 6.

The game starts at 7 and will not be televised locally. I will check in here at points during the game and between periods to leave updates.