Share All sharing options for: Canes Season Ticket Holders Can Thank the Flyers 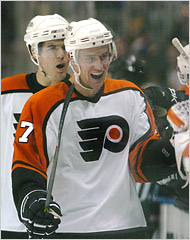 Hurricanes season ticket holders received emails yesterday reminding them to RSVP by Wednesday, (today) for the "Exclusive Full STH Pregame Skate" on Saturday morning. The annual event gives fans the chance to mingle with other season ticket holders while watching the team perform their typical, pregame on-ice practice. The organization also serves refreshments and has a guest speaker or two during the affair.

The only difference this year is that the Hurricanes have not had any typical, pregame on-ice practices. At the beginning of the season Peter Laviolette called an end to the ritual, stating that he felt the team would have fresher legs come game time if they skipped the routine.

The informative emails made note of this change, and included the following paragraph-

It is important to note that while the Exclusive Full Season Ticket Holder Pregame Skate has been a long-standing STH event, recent connections have been made between over-training and injuries, and as a result, pregame skates have been scaled back for the Hurricanes since the beginning of the season. Please be aware that we expect a limited number of Hurricanes players to be on hand for the skate; however, we anticipate a full Flyers skate to take place.


This situation might be looked upon as being a bit ironic, if not humorous.

First of all, one could argue that the new strategy of skipping the pregame skate has not worked very well. The team has come out flat in the first period more often than not, and has allowed the first goal in the last 10 games in a row. Injuries are still occurring and seemingly have not subsided at all since the new procedure has taken place. Perhaps it is time for a change in the morning routine?

Secondly, would it kill these guys to come out and take one pregame skate for their full season ticket holders, loyal patrons who spend thousands to watch, what at times has been a mediocre hockey team with a losing record at home?

Fear not Caniacs, at least the Flyers will show up for your special event. Just don't forget which team you are cheering for Saturday night.