Share All sharing options for: Paul Maurice Returns, Francis Goes Behind The Bench 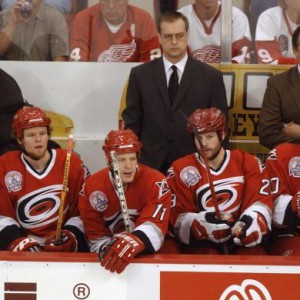 The Hurricanes reached into their past today, with GM Jim Rutherford replacing Stanley Cup-winning coach Peter Laviolette with Paul Maurice. Maurice coached the team for more than eight seasons and was replaced by Laviolette about five years ago.

Also joining the staff is NHL Hall of Famer Ron Francis, who will be an associate coach on Maurice's staff, joining Kevin McCarthy and Tom Rowe behind the bench. All titles remain the same, with McCarthy as associate head coach and Rowe as assistant coach, according to Kyle Hanlin, manager of media relations with the team. (Thanks to Kyle for confirming this)

Maurice and Francis did not sign long-term deals and will have the positions for the balance of the season, then be evaluated to determine the future direction of the coaching staff.

"We've put this structure in place for this year," Rutherford said about the coaching staff.

Maurice was very gracious in talking about both Laviolette and the position.

That's what led to Rutherford placing a call to Maurice. And the chance to return "home" was all the convincing the ex-Canes and Leafs coach needed. His decision to accept the job was sealed by "the opportunity to work with a group of people you completely trust and have been very successful.

"From a personal point of view, this is home. I couldn't pass that up."

While Rutherford praised Laviolette, it was clear that there were still tensions that first cropped up publicly this offseason when Rutherford questioned Laviolette's decision to not hold exit interviews following a disappointing season.

Both Rutherford and Maurice hammered home that there will be an emphasis on re-establishing one-on-one relationships between the players and coaching staff. Rutherford said he considered Maurice's ability to do that one of his strong suits.

Maurice also stressed that the team would keep the attacking style that was brought in under Laviolette, but there would be adjustments on the defensive side to better evaluate when the team should be aggressive and when they should play conservatively — another criticism Rutherford had of Laviolette following last season.

As for Francis, it will be his first time behind the bench as a coach. Rutherford said that, like Maurice, Francis should help in reaching out in the locker room and making the players more comfortable with their roles. Rutherford even mentioned — albeit briefly — that perhaps not everyone in the locker room had been accepted, and that team chemistry and rebuilding confidence are the main tasks at hand.

"Take friendship aside, I wouldn't do this if I didn't think [Maurice] and Ron were the right two to turn things around," Rutherford said.

Francis admitted to being both excited and nervous about his new position.

"I wasn't looking for this," "Francis said. "At the end of the day, I thought I'd give it an opportunity."