Opportunity Knocks ... For Many

Share All sharing options for: Opportunity Knocks ... For Many 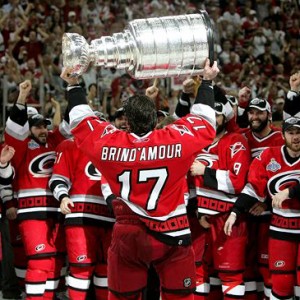 It's the morning after, so to speak, and the shock has worn off ... somewhat. To say the Carolina Hurricanes franchise is beginning a new era and starting over would be naive at best, downright silly at worst. It's still "Our Team" and clearly Paul Maurice was still part of "Our Tradition."

But at the same time, it would be just as short-sighted and foolish to say there isn't an opportunity in this entire situation.

It starts with the most obvious opportunity: a chance for a team that has clearly struggled to regroup and return to a level of consistency and effort that will make the fans proud and turn the season around. Can Maurice and Ron Francis be the catalysts for that? That's for time to tell and not for pundits to predict.

Peter Laviolette's dismissal was not a shock, but Maurice's return was. It's easy to remember the 41-year-old coach's clutch-and-grab successes and failures, along with the "Mo Must Go" chants. Right now, Maurice's easygoing attitude, dry wit and pregame, in-game and postgame poise provides a change — one way or the other.

But Maurice has an opportunity, and that's all that GM Jim Rutherford has given him. By bringing Coach Mo in for the balance of the season, Rutherford irked and perplexed many media and fans. But this decision has a built-in escape clause. Since Maurice was not signed to a multiyear deal, Rutherford has handed the reins of the team to a familiar face, one that knows how the organization works and can seamlessly transition into nearly every part of the job. But with few players left from his previous stint in Carolina, Maurice faces one key obstacle: coaching the team.

It's in this setup that Rutherford made a good move. I won't argue that Maurice's return was a case of getting the best man for the job. But it was very possibly the smartest short- and long-term move the veteran GM could make.

First off, it kept Rutherford from miring the team in uncertainty and likely throwing away the 2008-09 season. His options were:


With Maurice, if he stabilizes the team and leads them back to the playoffs, Rutherford can then assess the job done and determine if this blast from the past is the right man for the job. If the team continues to flounder, Rutherford and the team can walk away from Maurice, thank him for his help and perform an offseason coaching search that will allow the new coach — and the team — to transition more fluidly.

Rutherford is also given a few opportunities now. If the team does continue its downward spiral, he'll begin to look at reshaping his roster. (Note: We're dealing in hypotheticals here)

With several defensive prospects ready for the NHL now or as soon as next season, Rutherford could attempt to move many of his blueliners to make room for the new guys. Dennis Seidenberg, an unrestricted free agent at the end of the season, could fetch a solid prospect or draft pick at the trade deadline if the team is not planning on resigning him. Anton Babchuk and Josef Melichar could lead to later-round picks and provide depth for a prospective playoff team. And maybe Nic Wallin, with just one more full season on his contract and seeing that a rebuilding team would keep him for another run at glory, would waive his no-trade clause and the Canes could get value in return. Frank Kaberle and Joe Corvo could even be shopped. In moving some of these players, the team would still have Tim Gleason and Joni Pitkanen to build around, with AHLers Casey Borer and Brett Carson and Wisconsin's Jamie McBain and Notre Dame's Kyle Lawson — along with a few others — in the wings.

Up front, the biggest decision this offseason — regardless of the on-ice results — will be whether to sign Tuomo Ruutu to a long-term deal. A lot of that decision will be based on whether or not the team thinks the emerging power forward can stay healthy. If the team decides not to give "The Finnish Crash" (I'm copyrighting this nickname ASAP!) a new long-term commitment, his trade deadline value would be through the roof, especially since he'll still be just a restricted free agent this offseason. Like Wallin, Ray Whitney and Scott Walker might be open to waiving their NTC's if it meant a shot to play for a contender for the next one-plus seasons until their deals expire. Matt Cullen (one full year left at $2.8 million) and Patrick Eaves (two full years left at a total of $3.1 million) could be options to clear cap room, though Cullen's price tag may be too much for another team to take on, and Eaves' play has been under par. That would still leave Eric Staal, Rod Brind'Amour (he's not going anywhere, people), Sergei Samsonov, Justin Williams and Brandon Sutter — plus whoever is not dealt — as part of a solid foundation, along with a few prospects that could make the jump.

But all of this is based on the team's and Maurice's failure. And here's where Rutherford has perhaps his best opportunity — to prove himself again.

Tuning in to XM satellite radio's NHL Home Ice, I listened as James "Boomer" Gordon — for my money the sharpest and most insightful guy on the station — asked the same questions that baffled fans were asking: Why go back to Maurice? Does this make any sense?

But then Gordon uttered a statement that rings true for me. He said something along the lines of, "I've learned through the years that most of the decisions Jim Rutherford makes are the right ones and to not question them too much."

And when you look at Rutherford's track record, it's hard to argue that point. He landed Brind'Amour in a blockbuster trade. He shipped out disgruntled prospect Jack Johnson and got Gleason and cap relief in return. He turned Andrew Ladd into Ruutu — seemingly another winner. He brought in Laviolette, along with free agents like Whitney and Cory Stillman. Sure, there have been stinkers (Sami Kapanen to Philly, the failed Marek Malik for Jan Hlavac trade). But for the most part, Rutherford's good moves have far outweighed the bad.

As for Laviolette, he was clearly a defeated man the past few weeks. His press conferences and comments all reflected a coach that was searching for answers and couldn't find them. Did Laviolette forget how to coach? Did the game, which was wide open immediately following the lockout and has tightened up some since, changed so much that his game planning doesn't work? Of course not. Both defensive lapses and offensive struggles have crippled the team at points the last couple seasons, but Laviolette was behind the bench for not only a Stanley Cup winner, but he also coached a two-time Selke Award winner. The Laviolette era will be remembered for the positives, not the negatives. He will be given another chance elsewhere, and don't be surprised if he's successful again.

The final opportunity is with the players. The past few weeks, Ruutu and Walker have been front and center in the press, saying the team needed to play harder. It's time for Brind'Amour and the leadership core to be the ones making those proclamations. It's time for Staal — part of that core — to also do it on the ice.

It's time for the team to become a team again. "Our Team." If it's Maurice or another face behind the bench for the foreseeable future, the responsibility still rests on the ones in skates. Maurice may be a return to the past, but it's the players that are "Our Tradition."

Now they have to go show that it's a tradition worth building upon. And the fans need to support them and do the same.