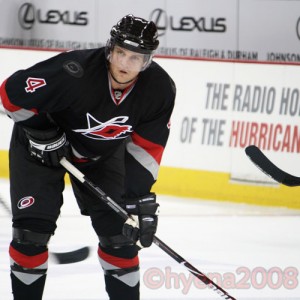 Here are some grades, analysis and projections for the everyday players on the Carolina roster after 25 games. Grades will be based mostly on expectations, rather than overall skill level and stats. Projections are based on the player’s current statistics and assume they remain healthy. The forward grades can be found here. Let's look at the rest of the lineup: the defense and goalies.

*Note: Frank Kaberle was not included because he has played just six games this season.

Anton Babchuk (19G, 1-3-4, minus-6, 8 PIMs, 13:43 TOI)
Babchuk's return to Raleigh has been relatively quiet. The big blueliner has played all but six games for Carolina this season, but that has been more due to injury on among his fellow defensemen than his play. Despite getting more than two minutes of power play time a game, Babchuk has just one goal and one assist with the extra attacker, and just two more assists on the season. His defensive zone play has improved from two years ago, but most nights he still lacks the physical play expected of a d-man his size.
Fun stat: Babchuk has just six hits and 20 blocked shots this season. Excluding Frank Kaberle — who has played just six games — those numbers rank last and second-to-last, respectively, among the other seven blueliners.
Projections: 4-12-16 • Grade: C

Joe Corvo (25G, 3-6-9, plus-1, 8 PIMs, 22:29 TOI)
Corvo's offensive output this season has been, in a word, disappointing. After piling up goals and registering almost a point per game in 23 games with the Canes last season, Corvo's numbers have been pedestrian, especially for someone getting a team-high 4:31 a game on the power play. His defensive zone play has been above average — though it still lacks physicality — and he hasn't made any crucial mistakes. Like Matt Cullen, Corvo is prone to hot streaks and cold stretches, and the cold ones have outnumbered the hot this season.
Fun stat: The team has scored nine more goals for than goals against with Corvo on the ice (25-16), but that number could be better is he managed more power play production (1-2-3).
Projections: 9-19-29 • Grade: B-

Tim Gleason (22G, 0-7-7, plus-1, 26 PIMs, 22:47 TOI)
Gleason continues to grow into a shutdown defender, but there are still steps that need to be made for him to become reliable in that role on an every shift basis. Still just 25, Gleason — who is on injured reserve right now with a leg injury — has emerged as a team leader, a player who can be counted on to stand up for his teammates, and he is starting to show some solid offensive instincts. He might be the best in league at waving his stick around with one hand and somehow making plays, and he's willing to do anything to help his team win. Still, there have been occasional lapses that have cost the team goals.
Fun stat: Gleason leads the team in shorthanded time on ice per game, playing 3:39 a night for Carolina.
Projections: 0-26-26 • Grade: B

Josef Melichar (14G, 0-3-3, minus-1, 8 PIMs, 8:27 TOI)
Melichar is not going to wow anyone with his play, but as an eighth defenseman whose top priority is always defense, his start has been decent. Instead of having to plug in a young player in a pinch, Melichar gives the Canes a veteran presence who seems to know his role and, as far as we know, hasn't complained about his limited ice time and several scratches.
Fun stat: Melichar has only three shots in more than 118 minutes on the ice this season.
Projections: 0-15-15 • Grade: B

Joni Pitkanen (17G, 1-9-10, even, 12 PIMs, 23:36 TOI)
I don't know that everyone has been thrilled with Pitkanen's play thus far, but his addition has been a positive. He was easy to blame on a few odd-man rushes allowed, but they could very well be the fault of Peter Laviolette's system, not Pitkanen's decision making. The same is true for the power play, where the entire team has struggled, making it tough to single out one guy. Still, his three power play points match Corvo's, and he's done it in around 45 percent less time on the ice with a man advantage. If he can stay relatively healthy for the balance of the season, Pitkanen should become more comfortable with his teammates and reach the 40-point plateau.
Fun stat: Pitkanen is plus-3 in division games, best among Carolina defensemen.
Projections: 4-39-43 • Grade: B+

Dennis Seidenberg (24G, 2-11-13, minus-4, 14 PIMs, 24:06 TOI)
Finally given the chance to be an everyday defenseman, Seidenberg has shown he belongs on the ice. He leads the Hurricanes D corps in several categories, including average time on ice, points, assists, power play goals and assists, and blocked shots. And while he's struggled at times at even strength at both ends of the ice, he has been perhaps Carolina's best special teams player to this point. His recent groin injury is definitely a concern.
Fun stat: His 67 blocked shots are tied for the fourth in the NHL.
Projections: 6-37-43 • Grade: A-

Niclas Wallin (25G, 1-8-9, plus-1, 24 PIMs, 20:34 TOI)
Wallin, the longest-tenured Hurricane on the roster, started the season with low fan expectations. But his play to the start the season was perhaps the best stretch of his career. Not only was Wallin back to being a shutdown defender who was willing to do anything in his own end, but he was contributing offensively, all resulting him having one of the league's top plus/minus ratings in the early going. As of late, Wallin — like the team — has struggled, and his offensive and plus/minus numbers have slowed significantly. There have also been some moments the past couple weeks that certainly reminded fans of why they were down on Wallin the past couple seasons.
Fun stat: All nine of Wallin's points (one goal, eight assists) have come at even strength — the most even strength points of any Hurricanes defenseman. He is one point shy of his career high of 10 points (accomplished three times).
Projections: 3-26-29 • Grade: B+

Michael Leighton (8G, 4-4-0, 2.99 GAA, .898 S%)
Leighton's early season play — coupled with Cam Ward's inconsistency — had some calling for a change in the goaltending hierarchy. But after a hot start, Leighton has lost three straight decisions, though the blame can't be pinned solely on him. With Ward injured, and inexperienced and unproven Justin Peters recalled from Albany, Leighton will have to carry the load and show he can be be a legitimate option.
Fun stat: Leighton's eight NHL appearances are the most he's had since playing 34 with Chicago in 2003-04.
Projections: 13-13-0 • Grade: B

Cam Ward (18G, 8-7-2, 2.68 GAA, .911 S%)
Without a doubt, Ward opened the door for criticism early in the season with a few soft goals that cost the Canes points in the standings. But he's been playing his best hockey since the Canes went into their scoring funk, allowing two goals or less in six of last seven appearances, hence giving the chance a team to win games they otherwise didn't deserve to. He has clearly re-established himself as the No. 1, but his lower body issues are a huge concern for a team with a new coach and in need of wins.
Fun stat: Ward has stopped three of four penalty shots this season and has a 1-1 record. Last season he allowed six goals on 11 attempts.
Projections: 26-22-6 • Grade: B

**CANES COUNTRY POINTS: 10 pts. to the first person to name the last person to coach the Hartford/Carolina franchise not named Maurice or Laviolette.