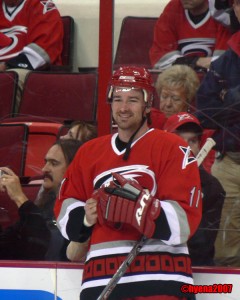 Forget just a moment that there is a new Sheriff, (coach) in town. Forget if you can, that the new coach is the same as the old one, (2003). There is another reason for fans to get excited tonight, and it has nothing to do with coaching.

After almost a year of absence, former All-Star Justin Williams will be making his return to the ice for tonight's game against the Penguins. After recovering from reconstructive knee surgery, the winger tore his achilles tendon just before training camp and had to have that repaired as well. He was expected to return in January, but he made remarkable progress on his comeback, has been practicing with the team, and has been cleared to play.

Williams scored 33 goals for the Canes during the 2006-07 season, the last full one that he played for the franchise.

Coach Maurice said that Williams will start out playing with Brandon Sutter, but will also see some powerplay time. He will probably be moved around as the game goes.

Of course, this also marks the first appearance behind the bench for newly re-hired Paul Maurice. During the pregame skate press conference this morning, Maurice said that he expected the team to be more defensively responsible during his tenure.

Apparently, Maurice had spent some time working in the "War Room" in Toronto, and said that he enjoyed watching referees perform from a different perspective. He had a new-found respect for them. At times he found himself reviewing a replay and saying, "What is that coach complaining about? That was a perfectly legitimate call."

One reporter asked him if that meant that he could no longer complain about calls from the Canes bench. "Of course not", Maurice laughed. "I'll probably call the guy a bum after the first call against us."

Pittsburgh should be coming into town a tired team. They lost a tough one in New York last night as the Rangers came from behind to beat them in a shootout. Mike Zigomanis and Tyler Kennedy were both hurt in the game and are questionable for tonight.

Of course, anytime Sidney Crosby, Evgeni Malkin, and Jordan Staal are in the other lineup, you better not be back on your heels. Crosby has been on a tear of late and after a slow start, Staal had two hat-tricks in November. Malkin is, well just Malkin.

The Penguins finished November on a hot streak and currently are in second place in the Atlantic Division with 32 points.

For more about the Penguins, check out PensBurgh.

The Hurricanes will be starting Michael Leighton in net while Cam Ward recovers from his groin strain. Young, Justin Peters was recalled from Albany to be the backup. Leighton lost against the Pens in Pittsburgh earlier this season, 4-1 as the home team exploded in the 3rd period.

Wade Brookbank is expected to be the odd man out as Williams returns to the lineup. Tim Gleason is still on the injured reserve, but Nic Wallin took the skate this morning and is expected to play. Josef Melichar will also be scratched.

((my bad, Melichar is not being scratched. Seidenberg and Gleason are both out))

Game starts at 7PM and it will be televised locally by FS Carolinas.