Share All sharing options for: Stone Cold Crazy - The Return of Tim Conboy 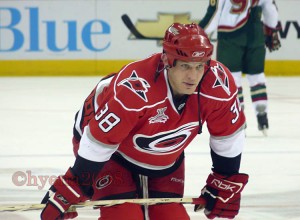 Several Hurricanes fans have been imploring management for the return of Albany captain, Tim Conboy. The combo defenseman/forward is known as being somewhat of a "loose cannon" on the ice. He admits to having a short temper and brings a bit of baggage with him.

Earlier this season, he was even accused of biting someone in a fight. (Hey, if someone stuck their hand in your mouth during an altercation, wouldn't your first inclination be to bite down?)

The River Rat was not suspended for the incident, but admitted that he "kind of went bananas".

No AHL disciplinary action is expected against captain Tim Conboy, who was ejected from Saturday's 3-0 matinee loss to Philadelphia following an altercation with the Phantoms' Steve Downie. Conboy got 29 penalty minutes: two minors, a major, a misconduct and game misconduct, the latter for persisting in his fight with Downie despite the intervention of linesman Frank Murphy.

"I would have thought we'd have heard something by now, so he should be all right," Daniels said. "He got a little carried away, but Timmy's an emotional leader, and he's looking after a teammate."

"I kind of went bananas," Conboy said. "Maybe I should have calmed down a little bit, but when you see a guy swinging his stick around like that, there's no place in the game for that. I have no problem with playing aggressive and playing tough and fighting, stuff like that, but there's no need to swing your stick at someone."
The pacifists of the Caniac Nation might be asking themselves, why? Why do people want someone on the hockey team who might do something crazy out on the ice?

Simple. Other teams also realize that he is capable of doing almost anything and they have to look out for it. He demands their attention. Opponent's bad guys might just spend some time looking over their shoulders wondering where Conboy is, rather than spending all of their time thinking about which other Carolina player they can knock into next week.

Also, the Canes might perform at a higher comfort level, knowing that someone has their backs. You can say a lot of things about Tim Conboy, but he will defend his teammates to the very end. For instance, he was suspended by the AHL for 8 games during the playoffs last year for leaving the bench to enter into a brawl. He was suspended another time by the league for accumulating three instigating penalties.

The agitator plays with an edge and is the type of player opposing teams hate to go against. Opposing fans tend not to like him either.

Will management try to keep him on a short leash this weekend, or take the collar off and let him go wild?