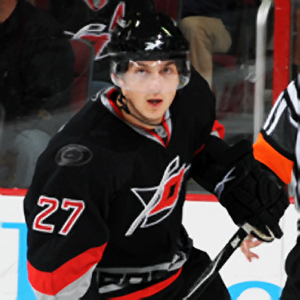 The Hurricanes started their season eight deep on defense, with GM Jim Rutherford looking to part with one of his NHL blueliners to make his budget. Fast-forward two months, and not only has Carolina seen all eight play at least half of the team's 28 games, but they've recalled three AHL d-men to fill in the holes cause by a wealth of the injuries.

Only seven Hurricanes have played in all 28 of Carolina's game this season, and Joe Corvo, who has a history of staying healthy, is the lone defenseman in that group. The situation was so dire on the back end that the team called up three AHLers in a week's time, bringing Albany captain Tim Conboy and 23-year-old prospect Casey Borer up from the River Rats Dec. 5, followed by Brett Carson just two days later.

But here's where the story takes a good turn. Conboy and Borer, returning to Raleigh after each seeing brief time in the NHL last season, have looked confident and able in two games since their recall. Carson had a brilliant NHL debut, playing 22 solid minutes, 4:07 of which were shorthanded — including being sent out by coach Paul Maurice for the beginning of a 5-on-3 penalty kill.

While Conboy was a free agent signee by Carolina, Borer and Carson were third- and fourth-round picks, respectively, of the Canes in 2004 — the draft where the Hurricanes began to replenish a shallow prospect pool.

It would be easy to pinpoint the 2003 Entry Draft as the springboard for great things in Raleigh. With three Grade-A players — Marc-Andre Fleury, Eric Staal and Nathan Horton — on the board, the Hurricanes were set to choose second. When Pittsburgh swapped picks with Florida and chose Fleury, Carolina was left with a decision between Staal and Horton. It's easy now to say they made the right choice.

But if you look down through the rest of that Canes draft, it's riddled with disappointment.

Four defensemen were chosen, with second-rounder Danny Richmond the biggest name. While Richmond has fallen short of expectations (he was dealt to Chicago for Anton Babchuk in early 2006; he's now in the Pittsburgh organization), he at least found his way to the NHL for 49 games. The others — Aaron Dawson (fourth round), Matej Trojovsky (fourth) and Tyson Strachan (fifth) — have never come close to sniffing the NHL, with only Strachan reaching the AHL, where he currently plays with Peoria.

Three late-round forwards all made little or no impact, with Shay Stephenson (seventh round) playing two games for the Kings in 2006-07 before departing for Europe, while Jamie Hoffman (eighth) and Ryan Rorabeck (ninth) never even went pro.

Goalie Kevin Nastiuk was selected in the fourth round, but the team decided not to re-sign him after last season, and he's since found himself with Gwinnett of the ECHL.

But 2004 was the true turning point. With the draft being held in Raleigh, Rutherford traded up to take Andrew Ladd fourth overall. Despite major talent at the very top (First overall: Alex Ovechkin; second overall: Evgeni Malkin), the draft was — and still is — considered thin on talent. Ladd wound up as a serviceable choice. He contributed to the Hurricanes' Stanley Cup, and was parlayed into Tuomo Ruutu straight up at last year's deadline.

With their next three choices the Canes made solid picks, getting goalie Justin Peters (currently with the Canes due to Cam Ward's injury, though he's yet to play in an NHL game), Borer and Carson. Swedish goalie Magnus Akerlund — who has shuttled between the SEL and the second league — was their fifth-round pick and is still the team's property. The final three picks were misses.

Getting four players that have at least made their way to the RBC Center has to be considered a success, especially given the team's track record throughout the early 21st century and after seeing the potential of Borer and Carson.

The 2005 and 2006 drafts had hits and misses. Jack Johnson, the 2005 third overall pick, was dealt for Tim Gleason — a building block of the franchise. Forwards Nicolas Blanchard (192nd overall in 2005), Harrison Reed (93rd in '06), Bobby Hughes (123rd in '06), Stephane Chaput (153rd n '06) and Nick Dodge (183rd in '06) have all been in Albany lineup this season. Jamie McBain, the team's top pick in 2006 (63rd overall), has developed with the Wisconsin and has the looks of a top four blueliner, while 2005 seventh-rounder Kyle Lawson is one of Notre Dame's top defensemen, helping lead the Fighting Irish to the NCAA championship game last season.

We all know about Brandon Sutter (11th overall in 2007), and we'll soon see his draft-year mate Drayson Bowman (third round) in Carolina, too. The rest of that draft looks promising as well, with Justin McCrae (fourth round), Chris Terry (fifth) and Brett Bellemore (sixth) all maturing in the CHL or, in Bellemore's case, Albany.

And it might be too early tell, but the quartet of Zach Boychuk, Zac Dalpe, Michal Jordan and Mike Murphy have had such good post-draft seasons so far that all four 2008 picks could make their way to the pros. Even seventh-rounder Samuel Morneau, playing for a dreadful team in the QMJHL, showed some Chad LaRose-like qualities during prospect camp.

What was once an ankle-deep system is now showing signs filling up. You can see it first hand at the RBC Center if you look to the blueline.

Even better news? The possible overflow to the NHL — Boychuk, Bowman, Dalpe and McBain, to name a few — looks to benefit Carolina for years to come.