[caption id="attachment_2876" align="alignright" width="300" caption="Tuomo Ruutu is due a raise this offseason."] 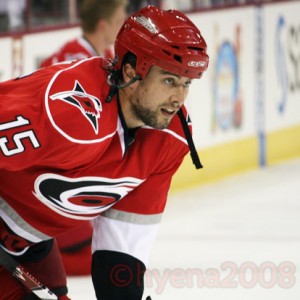 In these times of cost certainty, salary caps and revenue sharing, fans of professional sports have never been so knowledgeable about their favorite teams' finances. While the NFL and NBA's budgets are riddled with phantom dollars (NFL) and little "sense" (the NBA's sought-after expiring contracts), NHL fans can easily wrap their minds around the basics of the salary cap without having to worry about things like football's non-guaranteed contracts and basketball's Larry Bird exemption. Take the total salary, divide by years of the contract, and *poof* — you have your annual cap hit. Sure, the collective bargaining agreement got a little more confusing this season with performance bonuses — regardless of if they're earned — counting fully against the cap, but for the most part it's simple math with an easy bottom line: stay under $56.7 million.

Which brings us to Carolina, a team that doesn't worry so much about the salary cap, but rather a predetermined budget. While many bemoan the fact that Carolina does not spend up to the limit, the fact the cap exists at least allows the team to stay on a relatively even playing field with their large-market opponents (anyone remember Detroit's $800 billion payroll in 2002?).

This year, owner Peter Karmanos set a $45 million budget for GM Jim Rutherford to work with, and while Rutherford is on pace to exceeded that budget by more than $5 million, the Hurricanes are still well below this year's cap limit.

But with the team struggling and attendance slipping (blame the economy, competition from other Triangle sports or the team's record — take your pick), it would seem unlikely Karmanos would shell out more money to bring in reinforcements on the ice, and may even expect Rutherford to make further efforts to get the payroll closer to the budget.

Here's where things may get sticky.

While the team's cap hit and estimated payout for this season stand at $51.543 million and $50.527 million, respectively (according to a great site, nhlnumbers.com), next year's team offers little relief and less opportunity for change.

Only four regulars have expiring contracts this season (Chad LaRose, $875K; Ryan Bayda, $475K; Wade Brookbank, $475K; and Dennis Seidenberg, $1.2M) that will lead them to unrestricted free agency, and the only other player coming off the books earning a one-way NHL salary is Josef Melichar, ($1M).

Carolina is committed to an estimated $44.167 million next season, with a cap hit of $46.754 million already on the ledger — only Philadelphia, with a cap hit of $47.371 million and estimated payroll of nearly $50 million, is already committed to more next season. Then take into account the Canes have key restricted free agents to re-sign (Casey Borer, Brett Carson and, most importantly, Tuomo Ruutu), and the situation looks shaky.

Ruutu (currently earning $2.25 million) and Seidenberg will both want — and deserve — longer deals with more pay. Borer and Carson will get small raises, but while Bayda may be willing to take less than $1 million to stay in Raleigh, LaRose may need to look elsewhere to earn even an equal amount as this year, especially with someone like Patrick Dwyer likely to take less to get a full-time NHL shot. Tim Conboy is on a one-way deal next season ($500K) and will replace Brookbank.

Anton Babchuk, also an RFA, will seemingly be gone in this scenario. With five other defensemen already signed through next season (plus Borer, Carson and, hopefully, Seidenberg), there's little room for the Russian blueliner. That could mean a trade as early as this year with some of the younger rearguards emerging.

A bit of good news rests in the fact that the young players looking to make the leap to the NHL on their entry-level deals (Zach Boychuk, Drayson Bowman, and perhaps Jamie McBain, among others) would have higher cap numbers than their actual paid salaries because of their bonsuses counting as a hard number against the cap, as mentioned above.

But bringing in young players doesn't solve the sheer number of players Carolina has signed, and while trading older players is often a solution for a team looking to turn over its roster, many of the players the team would consider moving would have to waive their no-trade clauses to be on their way.

That leaves, for the most part, some key players as possible trade bait to free up salary. Justin Williams or Joe Corvo may come to mind, but both are on reasonably priced, multiyear contracts and any move to deal them would certainly come across as a salary dump if there weren't lower-priced, high-end talent coming back to Raleigh. Matt Cullen or Frank Kaberle could be traded, but it might be hard to find a match given their salaries compared to their output. The $3.1 million total Patrick Eaves will be paid for the next two seasons barely dents the budget problems and, at just 24, could prove to be a bargain if his game gets untracked. The door is als open for Seidenberg or Ruutu — or both — leaving, be it by free agency or even a trade as early as this season (if Rutherford thinks he will be unable to sign them at their "slotted" cost). Who knows — both could decide to return to Europe for more money.

This gives Rutherford few options going into next season unless he decides to go off the board and deal someone like Tim Gleason (unlikely given his potential) or Joni Pitkanen (also doubtful since the team tried so hard to acquire a puck-moving d-man, plus would have to take 75 cents on the dollar for a player that would be going to his fourth team in four years). Even the coaching budget has ballooned, with Peter Laviolette getting paid for sitting at home and a decision forthcoming on the future behind the bench, be it Paul Maurice signing a long-term deal, Ron Francis or Tom Rowe taking over, or a new face emerging as the voice on the bench.

So get used to the 2008-09 Hurricanes, because they'll probably look very similar to the 2009-10 version, minus a few familiar faces.