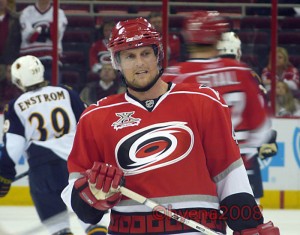 The Carolina Hurricanes activated Dennis Seidenberg today and he is expected to play in Philadelphia tomorrow night. Seidenberg has practiced with the team for the past few days and looks ready to go. More from the Hurricanes press release-

Seidenberg, 27, leads all Hurricanes defensemen and ranks fifth on the team with 13 points (2g, 11a) in 24 games played this season. The Schwenningen, Germany, native ranks second on the team in average ice time, at 24:06 per game. In his third season with Carolina, Seidenberg (6’1", 210 lbs.) leads the team and ranks tied for fifth in the NHL with 67 blocked shots, while ranking fourth on the team with 50 hits. He has missed the Hurricanes’ last four games with a leg injury


Anton Babchuk took his place on the injured reserve and is expected to be out 2-4 weeks with an "upper body injury". Babchuk sustained his injury during Sunday's game against Washington.

Tim Gleason has been practicing, but has been wearing a "no touch" jersey. It is possible he could be ready by Saturday.

Cam Ward has been sharing time with Justin Peters at practice. It's not yet known if he will be available Thursday.

Frank Kaberle and Nic Wallin are not back on the ice yet.

The activation of Seidenberg means that the Hurricanes will have a "full" complement of six defensemen for the game against the Flyers. Call-ups Casey Borer, Tim Conboy, and Brett Carson will be counted on to help out regulars Joe Corvo, Joni Pitkanen, and Seidenberg.