Television and the NHL, an Imperfect Marriage

Share All sharing options for: Television and the NHL, an Imperfect Marriage 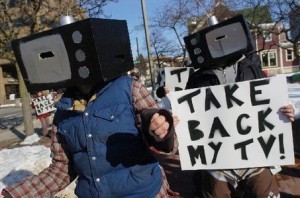 Lately, it seems like devotees of the NHL have had one problem after another just trying to do what should be a simple thing: watch their favorite sport on the airwaves.

ComCast has "bandwidth" issues on the west coast, Versus has blackout rules concerning multiple games at certain times on Monday and Tuesday nights, FS Carolinas randomly shows commercials during the middle of play during Hurricanes games, and finally the the biggest pet peeve of Caniacs, that some games are not being broadcast at all.

Sometimes it's tough to be a hockey fan. As Rodney Dangerfield used to say, "we don't get no respect".

When customers sign up for the Center Ice package, most assume that they will be able to watch almost any NHL game being played. Unfortunately, nothing could be further from the truth.

Apparently, some fans in California only get about half the channels they are paying for. Mike Chen does a great job of discussing that problem here.

Then there is the Versus blackout controversy. The NHL made an agreement with Versus that the network would have sole rights to broadcast certain timed games within specific guidelines. For the most part, the NHL has scheduled around these limitations, but there are exceptions. For instance, there have been at least two Caps games affected this season that were not shown on Center Ice because of Versus blackout restrictions.

Caniacs suffered once because of this bad agreement two seasons ago when the blackout affected a Hurricanes game.

Could it be too difficult to allow the game to be broadcast by someone else if Versus chooses not to pick it up? Why does it have to be a "dead broadcast", so that no one can see it at all? This doesn't seem like a good deal for the league or for fans.

Then we have the fiasco which came up during the Flyers/Canes game last week. Commercials started playing randomly, right during game play. At one point, the Hurricanes were in the middle of a powerplay and a commercial started up. Fans were outraged and many complained to the cable provider and the network. For the first few days, no one took responsibility for the snafu. FS Carolinas pointed to Time Warner Cable and vice versa.

The News and Observer reported today that FS Carolinas finally admitted they were in error. A network spokesperson said that they will "work to make sure it doesn't happen again".

Finally, the most complained about problem regarding "televised" games around these parts is the fact that some games are not televised at all. There have been two recent Sunday games where neither the Hurricanes nor the visiting team televised the contest. How can fans of either team watch their favorite players if neither of the participating teams take enough interest to televise the game?

A Canes Country reader recently emailed me complaining about this very issue. She feels that if a person purchases Center Ice, they should be able to watch all the games. Here are excerpts of what she sent to me-

I am in Winston and subscribe to Time Warner. If I lived in the triangle, I would go to every game, but that would still leave away games questionable.

So, is there something that as fans we can do collectively to effect some kind of change? I was ready to cancel my Center Ice but the NHL site says that the subscription is non-refundable.....

Maybe, CC readers can gather some steam and we can do something about this. Call me crazy, but on game days, I don't take appointments after 4:30 just to make sure I am home by 7PM. My staff has circled all game dates on the calendar. Once I get home, I don't take phone calls and no one is allowed to come over to visit. Those three hours are mine. I paid for them and I look forward to them.... sometimes for days.


Isn't this the exact type of die-hard fan the NHL covets? She's not alone, I know several people exactly like this and there are many, many fans outside the immediate area who love to watch the Canes, but can not make it to every game. Should they be punished?

Wouldn't it make sense if the NHL would somehow mandate that every NHL game be televised, by either the visiting team or home team? In this day and age when they can live-stream preseason games online, at the very minimum shouldn't they do the same for a regular season game if it is not televised?

If they don't want to or can't do it, then ask the local blogging community for assistance. There are some tech savvy people out there who would love to help out.

(Thank you Ms. "A" from Winston. I'm not sure if CC readers have enough clout to change NHL or team policy, but perhaps if enough people let the NHL office know that all games need to be televised in one way or the other, something eventually might be done. Perhaps someone has other ideas of what to do)?

((Of course, this is regarding broadcasts in the USA only))