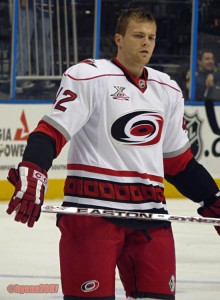 The Canes bring their battered bunch to Madison Square Garden tonight to take on the New York Rangers, a team which should be tired after losing to New Jersey on the road last night. This will be the third game in four nights for the New Yorkers.

The Rangers were losing 5-1 to the Devils in last night's game, only to come back and tie the score. Unlike the Canes, who folded on Thursday night under similar circumstances, Brett Sutter's team regrouped and ended up winning, 8-5.

Cam Ward has been activated off of the injured reserve list and should start this game. He had a strong practice yesterday and looked good to go. Justin Peters was re-assigned to Albany. Dennis Seidenberg is also expected to return for this game, although he was expected to play in Philadelphia as well, but had to sit out because of a last minute re-tweaking of his groin.

Tim Gleason is close to full strength and could return, but it is expected that he will wait until Tuesday's game against Montreal. Frank Kaberle, Anton Babchuk, and Nic Wallin are not close.

**UPDATE- Tim Gleason was just activated which means that he will probably play tonight. Casey Borer was returned to Albany

The Hurricanes have used 30 different skaters so far this year, one of only three teams in the NHL to use that many. In contrast, the Rangers have only used 22 skaters this year.

After a red-hot start, the "rags" are 5-5 in their last ten, but still are second in the conference with 40 points. The Canes will be wearing their "lucky", black third jerseys again tonight.

The game starts at 7 and will be broadcast by FS Carolinas.

((Attached is an MP3 of coach Maurice after the Canes practice yesterday as provided by the Canes media staff)).