Montreal fans know all about Sergei Samsonov. It was exactly a year and a half ago — June 16, 2007 — that the Canadiens parted ways with Samsonov, sending him, his $3.5 million salary and the Russian's paltry 26 points the previous season, to Chicago for two contracts GM Bob Gainey quickly shed as collateral damage.

[caption id="attachment_2974" align="alignright" width="245" caption="Kovalev and Samsonov have been teammates in Montreal and for their country."] 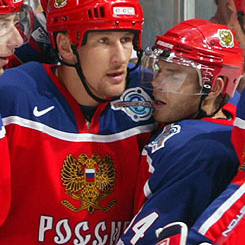 The Hurricanes knew Samsonov well, too. They had watched him bob and weave his way through defenses with Edmonton and right into a matchup against the Canes in the 2006 Stanley Cup final. Samsonov parlayed the 15 points he had in 24 playoff games with the Oilers into a deal with Montreal — two years, $7 million.

You don't have to remind the Montreal faithful. They remember. They've watched with glee as Samsonov fizzled out in The Windy City, and surely chuckled when Carolina claimed him on re-entry waivers late last season for their playoff push. They didn't blink when Samsonov went on a point-per-game tear for the Canes last season. When Carolina gave Samsonov another $7.5 million over three seasons, they probably had an initial flashback to Gainey's accepted offer, recovered, then smiled broadly.

Another team fooled, they thought.

That's how Samsonov started this season with his new, hefty contract. And even after his first goal of the season — deposited like a late check in front of the Montreal faithful at the Bell Center — Canadiens fans nodded knowingly. One goal doesn't make a season, and getting it in Montreal certainly doesn't wash away the disdain Canadiens fans have for Samsonov.

Since the 18-game goal drought, Samsonov has actually played well, registering four goals and five assists with a plus-8 in the past 12 games. While his confidence waned during his rough stretch, anyone who watched the Hurricanes each night knew Samsonov wasn't taking his money and running, but rather struggling with his fragile confidence.

But when Samsonov looks across the ice tonight and sees No. 27, he won't see a player like him who takes his struggles and lets them weigh him down, smother him. Instead he'll see one of the most talented snipers in NHL, someone who is capable of taking over a game at any moment from anywhere inside his opposition's blueline.

And he might wonder what happened to that guy.

The 2007-08 season was a rebirth for Alexei Kovalev. His 47 power play points led the entire NHL. His 35 goals, 49 assists and 84 points were all the most he'd tallied since the 2000-01 season when he went for 44-51-95 with Pittsburgh. By all accounts, last season was Kovalev's second-best statistically, but maybe his most important as far as his legacy. He was the main cog in the Montreal machine, and despite a disappointing exit from last year's playoffs, the expectations for both Kovalev and the Habs were sky high.

On their 100th anniversary, the Canadiens planned a season filled with celebrations — including the upcoming All-Star Game — and were pegged as the Eastern Conference's favorites. So when I picked Boston, not the Canadiens, to win the Northeast Division, it raised a few eyebrows and maybe smelled of picking the underdog for the hell of it.

But I believed it. However, I thought Carey Price — talented, but young — would be the main one holding up the franchise from fulfilling their centennial destiny. Price has, thus far, held up well despite playing in front of a team riddled with inconsistency and injuries (sound familar, Canes fans?) and battling injuries himself. But in previewing the Northeast, I also mentioned this:

And I feel so much of Montreal’s success hinges on Alexei Kovalev and the fear he instills in the Canadiens’ opponents. If the Habs get the Kovalev of last season, they should have a good year. But if he lags off — which seems unlikely in a contract year, but stranger things have happened concerning AK27 — Montreal could be battling to just make the playoffs.

I guess stranger things have happened, because Kovalev — in the final year of a contract that pays him $4.5 million this season — has netted just five goals (one with an empty net) in 29 games. He has one power play goal, on pace for a handful instead of the robust 17 he potted last year.

The deadly one-timer and lethal wrist shot that every opponent and their fans feared whenever Kovalev was on the other side of the ice is gone. Without his presence causing opponents to center their defensive game plan around Kovalev's dynamic abilities, Montreal's other skill players have struggled. Injuries to captain Saku Koivu and underrated shutdown d-man Mike Komisarek, along with Price, have further complicated matters.

I guess the oddest part is Kovalev is in the final year of his contract, a scenario where most players thrive and play their best. Have Kovalev's skills deteriorated over night? It's doubtful. Is there tension between him and his coach, Guy Carbonneau? Perhaps, but it's not so bad that it's dominating headlines — plus, even that didn't seem to derail Kovalev last year. Or is Kovalev ready to return to Russia and join the newly formed Kontinental Hockey League, giving him little motivation this season despite the historical implicatons and a legitimate shot at the Stanley Cup? Who knows.

But there is one thing I do know. Kovalev's play seems to be a barometer for the team's success, and while the Habs have kept their head above water and stayed both within reach of the Bruins and in the playoff picture, it certainly hasn't been the kind of season everyone expected up in Montreal. With Koivu, Alex Tanguay, top goal scorer Robert Lang, Chris Higgins and Tomas Plekanec all joining Kovalev in being due new contracts at season's end, the door is closing on this team's chance instead of opening further.

And it's starting to look like Kovalev could care less.

That's one thing you can't say about Sergei Samsonov.

He cares. Maybe sometimes too much, but at least he cares.