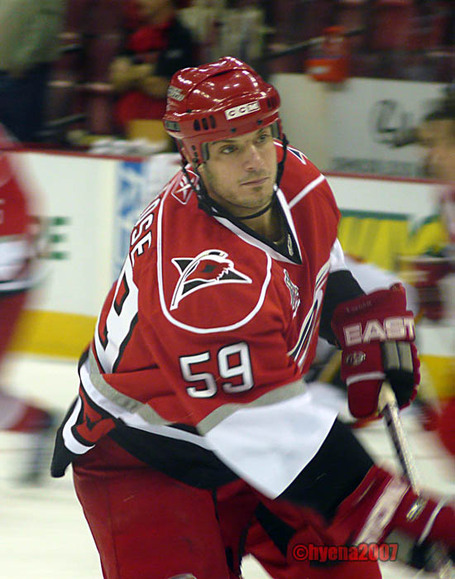 Chad LaRose kick-started the Hurricanes last night with the team's first short-handed goal of the season and led them to a 3-2 win over the Tampa Bay Lightning.   Not only did the feisty forward score the crucial first goal, he also led the team with three hits and was a spark plug all night long.

After an active, but unproductive first period where the Canes fell behind 1-0, the home team responded with two second period goals.  At about the 5 minute mark, LaRose scored his shortie right in front of the net off of a nice feed by Matt Cullen.  Then with just a minute and a half left in the period, Cullen scored one of his own on a wrap around attempt.  Both goals were the 11th of the season for the respective players.

The Lightning made things very interesting though, just 5 minutes into the third when Mark Recchi found Ryan Malone literally crashing the net.  Malone knocked both the puck and Cam Ward into the goal.  Recchi originally got the puck because of a turn-over by Ray Whitney.

The ex-Hurricane had a nice game for Tampa as he also scored the game's first goal off of a turnover by Anton Babchuk in the opening period.

The teams went back and forth in that final period until Eric Staal knocked in a rebound off of a Sergei Samsonov shot with just a minute and change left.  Staal called it a garbage goal, but it held up as the game-winner.

Attached is a video I took of the LaRose interview after the game.