Share All sharing options for: Michael Leighton - Ready if Needed

It takes contributions from every player to build a winning hockey team.   That includes players who might not get a lot of official ice time.   While Carolina backup goalie Michael Leighton has not had much of a chance to play yet this season, you might be surprised just how valuable he is to the success of the Hurricanes.

First of all, it's not easy being a substitute in any sport.  But it's especially difficult to be prepared to play the goalie position without the benefit of knowing much beforehand when you will be called upon to step into the action.  Most goaltenders will tell you, the more they play, the better they will play.  It takes time to get into a groove or rhythm.   But backup goaltenders don't have that luxury.  They usually just play one game at a time and sometimes are given very little notice of when that time will come.

This is the challenge facing Michael Leighton.  Cam Ward has been heralded as being one of the top goalies in the NHL.  Everyone knows that he will be given every opportunity to play as many games as possible.  How does Leighton keep himself prepared and ready to play at anytime, knowing that he probably will not get much action?   Recently, I asked him that very question:

"All I can do at this point is to work hard in practice and support my teammates and support Cam.  When I do have the chance to play, I need to be ready, so I prepare myself by working hard in practice.  That's my job right now, to make sure I challenge these guys every day and they challenge me.  That's pretty much what I try to do all the time."

Leighton has the most important role of being a good backup down pat, to be a good teammate.  Period.

It might seem simple, but some goalies around the league have had trouble doing that.  For instance, once relegated to the second string in Ottawa, Ray Emery would show up late for practice and had a bad attitude when he did show up.  How do you make your teammates better doing that?  How does that help the team?

Other goalies have complained about their playing time, creating tension and strife in the locker room.  Some figure that their roles are not that important and they do not work hard in practice.

There is no question that the team comes first for Michael Leighton.

The impression might be to some that the goalie does not get much work because the coaching staff does not have confidence in him.  Nothing could be further from the truth.  Cam Ward got the third most wins in the NHL last season.  He has proven over and over again that he is a clutch goalie, emphasizing that fact with another sterling playoff performance last year.

The Carolina organization showed their confidence in Ward when they made him one of the highest paid netminders in the league with his recent six year contract extension.  It only makes sense that they will want to use him as much as possible, without risking injury or over-working him.  The target for him seems to be around 70 games this season.

That doesn't leave many leftover for Leighton, but he will take whatever he can get.

The Canes acquired "Leights" before the 2007-08 season and assigned him to Albany where he made the AHL All Star team and finished with a league best .931 save percentage and 2.10 GAA.  He also had seven shutouts.  Leighton is no slouch himself in the playoffs and has a lifetime save percentage of .956 and GAA of 1.35 in AHL postseason competition.

Most notably, the goalie holds the record for most saves in an AHL playoff game when he made an amazing 98 saves in a losing effort in a multi-overtime game against the Philadelphia Phantoms.  He made 304 saves on 314 shots in that 2008 series.

His biggest game for Carolina was probably in San Jose last year as he helped the team battle to a 4-3 shootout win.  That game seemed to turn the season's momentum for the Canes.

Leighton got himself a freshly painted mask this year.  He was nice enough to allow me to take a couple close-up shots of it.  You'll see that it has several little white hurricanes on a sea of gray.  He has his nickname along with his daughter's name on the back plate.  I asked if he helped with the design and he said he did, with collaboration from the artist. 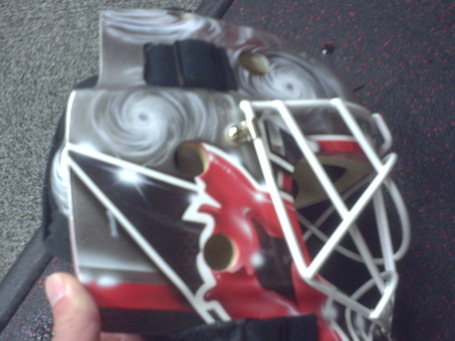 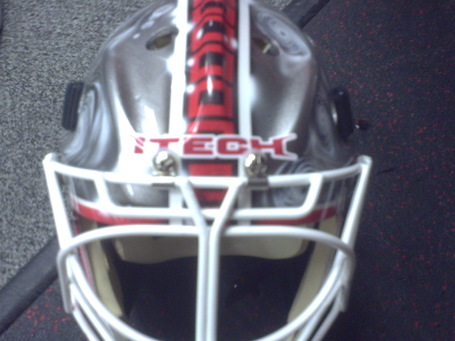 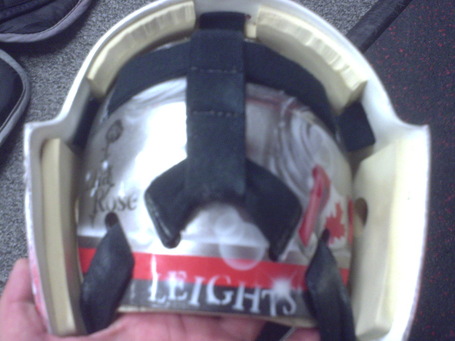