Share All sharing options for: Clicks and Clippings: Work & Progress

While it may feel like an off-day for the fans and media, with a two-day break before the Hurricanes return to the Rock to face the NJ Devils Saturday night, for the team there seems to be a lot of learning and decision-making actively going on, as the players and coaches determine what they learned from the inspired, if not successful, comeback and shoot-out loss to the Stanley Cup Champion Pittsburgh Penguins Wednesday night. As Coach Paul Maurice put it after practice Thursday

"We’re almost there," said Maurice of the Canes’ overall play. "There are still some improvements that we’re looking for, but there’s a lot more that the players understand. They’re more attentive in those areas. It was better."

As the discussion surrounding the Canes nascent 09-10 season has gone from "Where's the offense?" to "Where's the discipline?", we can see that this team, with 6 newcomers (Tom Kostopoulos, Stephane Yelle, Tim Conboy, Aaron Ward, Andrew Alberts and Jay Harrison), is still working to perfect the system that Maurice, Ron Francis (and the rest of the coaches) have envisioned. Each man first must identify, then master, their responsibilities within this system. For all 20+Cam Ward that dress each night, their roles, their positioning, their passing all has to be there, and played instinctively, with unbelievable quickness of both mind and body, to meet the requirements of top-tier NHL hockey. If it wasn't hockey, it might sound like work.

At the same time, the coaches are learning what the strengths and tendencies are of these newcomers (remember: these 6 new Canes are 30% of the 20 skaters they've had in these last 3 games). While many said that the Hurricanes would bring almost the same roster as last year (like in every pre-season rating we read in September), I would argue that when half the D-squad and your entire 4th line have never played together, there will be a learning curve. Throw in the short pre-season, and it's not hard to understand why there have been miscues, turn-overs and a lack of certainty when challenged. Luckily, I think we all know that this is a group of hockey players hand-picked by GM Jim Rutherford for "locker room chemistry" , their willingness to work together and commit themselves to winning as a team: prima donnas need not apply. With 76 games to go, let's watch what happens. Enjoy the show!

After the jump, are a few stories I've picked out about the Hurricanes, the Albany River Rats and across the NHL to fulfill your hockey craving as the team readies itself for its flight to New Jersey this afternoon.

From the local media:

Late addition: TTS as the team heads to NJ. Good news: Pitkanen is making the trip

Canes are "Almost There" - Tracking the Storm Blog One of the evils surrounding the shootout is that a loss can still feel devastating despite a hard-earned point. Wednesday was an exception. "We’re almost there," said Coach Paul Maurice of the Canes’ overall play.

Also from Paul Branecky: Jokinen Performing Playoff Encore - TTS Blog "Offensive play is so much with your confidence," said Jussi Jokinen, who had seen his regular-season point total decrease each season since his first year in the league. "For me, it’s been there since the playoffs."

Canes Now: Pitkanen returns to practice - from Thursday. Chip Alexander has this succinct quote from Joni on his status:  "Frustrating," Pitkanen said Thursday. Coudn't agree more. Let me add that I am delighted to hear that Pitkanen practiced with the team again Friday.

Further comments on Pitkanen's absence from the line-up, come from the  Branecky and Hanlin podcast recorded prior to the Penguins game. I wanted to relay these comments about Joni Pitkanen which may help to clarify some of the confusion about whether he is healthy, injured, wimpy, or just nuts as some commenters here at CC have implied: Branecky recalls when Joni left the game against Islanders last fall with a knee injury, and Paul had an opportunity to talk about the player with some of his PR colleagues in Edmonton, where Pitkanen played until the previous season. The trainers in Edmonton said that Joni Pitkanen "is one of those players who knows his body and knows it very well. And if he thinks he can't go, then he can't go. It really doesn't matter what a test says....if he feels like he's not at a point where he's ready to play, then you have to wait it out."  With the work-horse minutes Pitkanen puts in for Paul Maurice each and every game when he is healthy, the consensus of the coaches, training staff and certainly the player whose knee we're talking about, is that this is not something to rush. Frustrating as it is.

As always the Daily News Clippings over at the Hurricanes webpage, has several standard media links. However please note that the media office has paid Harwood a great compliment this week as Canes Country is now regularly linked as a "franchise-approved" source for Hurricanes News and Views. Thanks to them for that recognition.

The N&O ran a piece on attitudes among the players on the relatively new OT solution known as the "Shoot Out" :  NHL shootout has its good points

The long-time radio voice of the Hurricanes Chuck Kaiton also weighs in on the topic of the shootout  at WRAL.com. "Kaiton: Shoot-outs great for fans, but not fair".

Also pertaining to the shootout, out of Dallas, here's a more tongue-in-cheek look at how to do it best.

Some commentary on the battle amongst goalies for a spot on Team Canada:

On Saturday, Ward takes on another favorite candidate, the one who many would think has a lock on the top spot, Martin Brodeur. Again, something tells me Wardo till bring a little extra to the rink Saturday night for another head-to-head matchup (this is all assuming Brodeur even plays Saturday - see notes on the Devils below).

Fleury, Ward stand out among NHL goalies - Pittsburgh Tribune-Review It's no stretch to suggest that Fleury and Ward are the two best Canadian-born goalies in the league given recent playoff accomplishments.

Some highlights from Wednesday night:

Wednesday's Three Stars: Lundqvist, Perry star in victories - Puck Daddy While no one from the Canes-Pens game Wednesday made Sean Leahy's Top 3, the two video clips are certainly memorable. For your viewing enjoyment, please give it up once more as you marvel at Cam Ward's eye-popping glove save on Bill Guerin followed by an encore clip of Mr. Tuomo Ruutu's wow-ser of a full-body hit on the Pens' Kris Letang (I have to wonder if Letang thought getting his finger bitten [alledgedly] by Scott Hartnell was going to be the worst thing that happened to him this week?). Guess who captured the moment with the best image on the web? 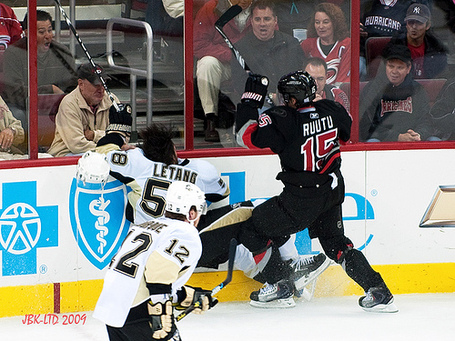 While the Canes head to New Jersey today, the Devils actually start off a back-to-back with Atlanta tonight, and the Devils' blogs haven't quite turned their focus on the re-match with the team that always seem to ruin their post-season experience. According to NJD blog Fire & Ice, Marty Brodeur will play tonight, but no indication on whether he or Yann Danis (who?) will be in goal tomorrow night against the Canes. In the context of the Team Canada goalie sweepstakes, I might think they would let Marty make this call.

From Albany, the River Rats brought their record to 3-1 on the season,  with a 3-1 win Thursday night over the Norfolk Admirals. They now have a 3-game winning streak (kinda makes ya jealous, no?). Read more at Hard work spurs rally - Times Union - Albany 'Energy' guy Goertzen nets key goal for the River Rats . For a broader collection of links once again; The Infestation.

Remember this image of  Nicolas Blanchard that LTD provided for us, as he drops the gloves with Nashville Predators' Tristan Grant in a pre-season game at the RBC? 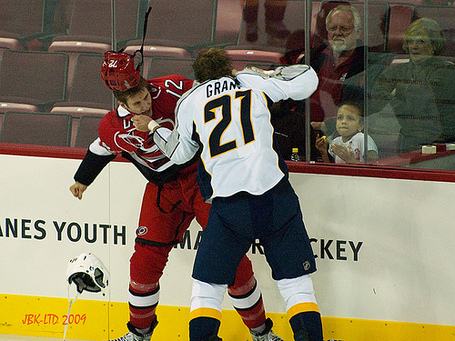 Blanchard is now under scrutiny and facing a possible suspension back in New York for what the Admiral coach called a dirty play, blindsiding Admiral Defenseman Matt Smaby. Not good.  This link also has some great Q&A with both coaches and players including local favorite Brandon Sutter. Did you know the 'Rats have killed off 100% of their opponent power plays this season?

Last, the Peewee hockey move of the week: check out this goal by 9-year old Oliver Wahlstrom of Boston. Stick Tap to Caps blogger Leslie at Musings of a Hockey Mom for the pointer (and Puck Daddy for posting it in the first place)