Clicks and Clippings: I got a Fever

Share All sharing options for: Clicks and Clippings: I got a Fever 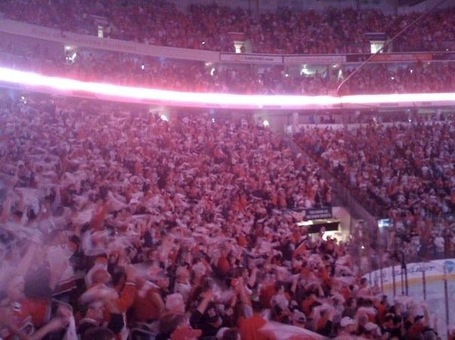 Since the announcement came in July that the Canes would open the 09-10 season at 7pm, October 2nd, hosting the Philadelphia Flyers, my countdown clock has gone from way too many days to less than 8 hours. And like many of you, this morning, I got a fever and the prescription is "more cowbell"!

It's been a full-on media blitz by the Canes' players and coaches this week, gearing up for tonight. I've linked most of what I could find, after the jump. But first, some previews of tonight's opener against Pronger and the Flyers.

The N&O published a special pull-out section this morning (on the good stationery) with several features and the URL for their Canes website appearing only about 8 times. Here it is in one easy click.  I'm a little disappointed that they didn't include the backpage's feature photo at the website. They lined up those exciting top-5 prospects (Drayson Bowman, Brandon Sutter, Mike Murphy, Jamie McBain, and Zach Boychuk) smiling large for the big shot under the heading: "The Bonus Brothers". Perhaps my first LOL headline ever from the N&O. Try to pick up a print copy if you haven't seen it.

Over at the Official Site of your Carolina Hurricanes they've got some insight on the season and the opener from Droschak and Branecky. And there's always their newsstand.

Turning to blogdom, Harwood's piece below on Andrew Alberts' first match-up against his former team-mates is a must-read.

Be sure to check out the Flyers' site Broad Street Hockey for their take on the game tonight. I picked up this rather ominous (though hardly surprising) link there this morning:  Top 10 Dirtiest NHL Players . (Spoiler: Chris Pronger FTW)

I also liked this dialogue over at BSH, between the two SBN bloggers for the Pennsylvania NHL franchises - a thoughtful 5 point Q&A between rivals.: Getting to Know the Penguins and Flyers - Five Questions with Pensburgh and  Broad Street Hockey

Breaking down the Canes' "D" - WRALSportsFan.com. Mike Maniscalco provides his analysis of this team - now appearing on video. The first in a series. WRAL.com has a feature page that's also loaded.

Gluten Free Raleigh: Carolina Hurricanes: 2009/2010 Gluten Free Update What can I say? The Canes will do anything to win new fans. Good for them.

Behind the Net: Hockey Analysis for the Thinking Fan - a great NEW blog for those who love to talk nerdy. Hockey Wonk Heaven.

BUZZ ON SOUND!!!! at 850 & 620 THE BLOG Hurricanes' Asst Coach,  Director of Player Development, and HOF'er  Ron Francis on Cam Ward and hockey in Raleigh (scroll down to find it - there are several audio clips at this link)..

Watch a local news piece on Tarheel Traveler Chuck Kaiton:   Announcer has been with Canes for 30 years :: WRAL.com

A conversation with Scott and Julie Walker about their experience last June published in  the N&O yesterday:

A look back on the 2009 pre-season with THN's blogger Adam Proteau The Hockey News:  Putting an end to the pointless pre-season. This is a follow-up to the discussion we had here at CC regarding the Hurricanes'  choice to play only 4 pre-season games.

Hockey Night in Blogdom: 30 Teams in 30 Minutes, Eastern Edition - Slap Shot Blog - NYTimes.com CC's Cory Lavalette is once again the inside source to the NYTimes' blog regarding all things Hurricanes.

News 14 | One on one with Canes defenseman Aaron Ward By far the best one to watch (about 8 minutes). He dishes a bit on his unhappy experience with Jaromir Jagr during Ward's brief stint with the Rangers. Ward-4 also brings up his concerns about working with Pitkanen tonight in the opener, without having the chance to play a pre-season game together as a blueline pairing. UPDATE: Pitkanen is held out and Jay Harrison will be in the line-up.

Female trainer preps Ward for return - WRALSportsFan.com Aaron Ward has changed his workout routine to keep up with younger players in the NHL. Who says white men can't jump?

NBC 17's  Shirley Min chats about hockey and the State Fair with  - yep - #4 Aaron Ward. Pure fluff. I got the feeling this Ward will give Tripp a run for his money in a few years. When asked about his favorite food, his reply: "I'm not unifaceted."  Unifaceted?

A little more from Albany

My Phil-osophy: Familiar faces to lead River Rats - Writer Phil Janack, who was recently released from the Schenectady Daily Gazette, has started a personal blog. This link details which players will wear the C and A's for the Rats this season.

ESPN the Magazine would like you to see Zdeno Chara tastefully nude Huh? Precisely which market are they targeting with this special issue? GF to GF, I highly recommend you stop by over here.

EA Sports sees Pittsburgh repeating as champions - However, it's not everyday you get to see the Canes picked to win the Presidents Trophy.