Carolina Hurricanes defenseman Aaron Ward is having a rough season, not unlike many of his teammates.  The Canes have had more than a couple of losing streaks early this year and have not yet been able to fight their way out of the basement of the NHL.   Ward was even put on waivers this past week, his future with the club now somewhat in question.

However things can change quickly in sports, especially when people of high character are involved.  Don't count out Aaron Ward.  He has the ability, attitude, and experience to turn his season around.  But regardless of how he does on the ice, Ward should be given credit for something special he is doing off the ice.

If you have attended games at the RBC this season, you probably have noticed an announcement made about "Ward's Warriors" as well as an introduction to the program's participants that evening.  Recently, I caught up with the big defenseman and asked him if he could provide more details about his namesake program.

Ward's eyes lit up when he started talking about it, as obviously he is very proud and committed to the project.

"When I first came here in 2001, I came to realize that the state of North Carolina was a heavily populated military area.  So when you are put in that environment, you really get the chance to appreciate those who put forth that sacrifice."

He elaborated a bit more.

"I was here for 9/11, and the majority of my experience in the United States post 9/11 has been here in North Carolina. And you see first hand the number of people affected by it.  Not necessarily the actual day, 9/11, but in the activities that have followed.  Through personal experience I got to know some people who have gone off.  I have a lot of patriotic friends and co-workers, so it became a vested interest to do something like this."

Ward described the work of teachers and those in the military as being typically "undervalued", but he values both professions, for the obvious reasons.  "The people who are brave enough to sign up in the military, put their lives on the line, and engage in battle, have my deepest respect," Ward said.

"Last year they had "Military Appreciation Night" in Boston and they asked fans to donate their tickets, but I felt it's tough for fans to do that, so I donated $15,000 toward tickets for the military that night.  As it turned out, several people who attended that game came from Taunton, Massachusetts and the majority of those assigned there ended up going to Afghanistan."

"Ward's Warriors" can be comprised of active duty military, veterans, or even wounded soldiers just returned from overseas.  The team's representatives try to select a mixture of participants from each of the military bases in the state.

The Carolina defenseman explained how the program got started.

"I'm older now and always wanted to do something like this.  And since this area is so heavily affected by the conflicts in Afghanistan and Iraq, I thought it would be nice to provide the active duty and their families the ability to step away from the stress a bit and enjoy a night out where everything is paid for, food, tickets, and drinks.  They sit in the comfort of a catered suite, in their own environment, and hopefully enjoy the game."

Last week on December 16, I had the opportunity to visit Ward's suite and meet some of the people involved.

First of all, I met Rob Leavel, (from ASC Construction Equipment) and Ed McHale, (from Volvo Rents), both of whom serve as hosts in the suite and partner with Ward in the program. I asked them how they became matched up with Ward.

"We also support the troops as corporate sponsors of "Operation Thank You", so this was a natural fit for us to team up with him because we both support the military."

They also said that they could not be more pleased with the partnership.  "Ward really takes an active part in deciding who will be in here.  He will take pictures of the participants and sometimes even bring them down to the locker room after the game."

There were some veterans and a Marine in attendance that night.  I had the pleasure of speaking with a couple of them. 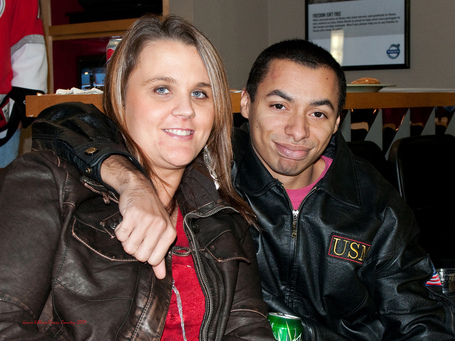 Pictured above on the right is John, an active duty Marine stationed in Camp LeJeune.  He signed up for the program in his church group and was selected that way.  This was his first Hurricanes game and he was having a great time. 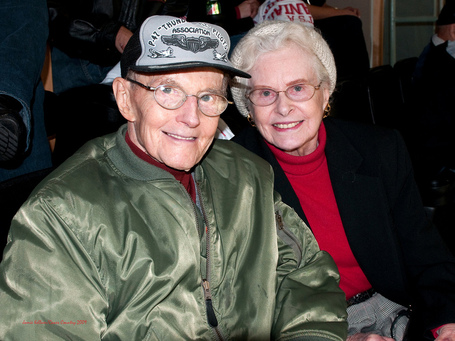 The next photo is of Hal and Marilyn Shook from Cary.  Hal is a veteran of three different wars and participated in the Normandy invasion in World War 2. He started out flying planes for the Army Air Corps, which was technically the Air Force before it was even called the Air Force.  The pilot flew fighter planes for 27 years while in the service.

Hal has been a hockey fan for a long time.  "I was stationed in Virgina for awhile, and a group of us used to go down to watch Greensboro play all the time, we loved it", he explained.  The vet still loves hockey but said he usually can't afford a seat anymore.  He was certainly enjoying this game.  "The boys are looking good tonight", he said with a smile.

Hal and Marilyn also gave me information about their website, (Flying Spirit.org), which you can check out if you are interested. 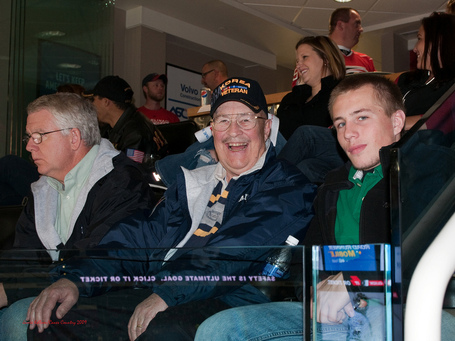 I did not have the chance to speak with the group above, but if I had to guess one looks like a veteran of the Korean War.

All in all, it was very interesting to find out more about the program. The area is very fortunate to have several players like Ward, who do so much for the community.  Cam Ward and Eric Staal have similar programs and some of the other players do different things as well.  For instance, the team's Kids 'N Community Foundation has granted over $7.5 million to various local youth orientated organizations, since it's inception.

Canes Country will be looking more closely at some other projects like these in the future.

(Many thanks to Kristina Boyce of the Hurricanes for her help in setting up the suite visit and to Jamie Kellner for her outstanding photography work.)