Clicks and Clippings: No place like Home for the Holidays

While hockeymomof2 readies for the arrival of Rudolph and his gang of 8, here are some quick links to peruse as the year winds down. Next week has potential to be more newsy, with only 5 more days till the Holiday trade reprieve expires on Sunday. And 70 days till the March trade deadline. And a little over six months till the opening night of the  2010 NHL draft in Los Angeles June 25th, 2010. But who's counting?

Half-way through a 4-game holiday homestand (not to mention having 6 home games in 8), the Hurricanes' 3-game home win streak was snapped last night. Next up, the Canadiens Wednesday and then the Flyers on the 26th. A quick trip to face the Capitals at the Verizon Center on Monday and then back to Raleigh they'll host Lundqvist and company again on New Year's Eve.

Rangers edge Canes - NewsObserver.com  The New York Rangers won 3-1 as goaltender Henrik Lundqvist turned back nearly everything the Canes threw at him, and Marian Gaborik had a goal and assist and was an offensive force.

Breakdown: Rangers stars steal the show against the Canes - WRALSportsFan.com The Canes Cam Ward and Rangers Henrik Lunqvist put on a fantastic display, but New York's Marian Gaborik is the show stopper leading the Rangers to a 3-1 win.

Tweets from practice today say that Eric Staal and Sergei Samsonov are both sitting out practice today. (Follow up, according to the Canes twitter feed: Both Staal and Samsonov are just taking "maintenance days" and should play tomorrow night. Wallin is very close to returning to action as well - wonder if it will be Carson or Harrison will be playing in Albany on the 26th?)

Devils' Martin Brodeur is NHL shutout King - NHL.com   Martin Brodeur is enjoying one of the finest starts in his 16-year NHL career. Appearing in 33 of the Devils' 35 games, he leads all goaltenders in victories (23-8-1), is tied for third in shutouts (three) and boasts a 2.10 goals-against average and .921 save percentage.

Barrasso awed by Brodeur - NHL.com  There's no question Barrasso appreciates perfection and, in Brodeur, he knows the bar is being set each time the veteran goalie takes the ice.

But, as Canes fans, at least we'll always have this moment to savor. Or this minute and change. Good times.

Florida Panthers vs. Philadelphia Flyers - Recap - December 21, 2009 - ESPN Boucher hurt a finger on his stick hand on the dive and was replaced by Michael Leighton. Leighton allowed Frolik's deflected goal and Horton's wrister from the faceoff circle to make it 4-0.

The Flyers have dropped to 29th in the NHL standings, only 8 points ahead of the Hurricanes. Poor Michael. However, as ice_chip just pointed out, if Boucher can't go Saturday,

How about this scenario for Saturday: Laviollete and McCarthy behind the Flyers bench and Leighton starting in net? Could happen.

After the jump, some video highlights, updates on Albany and draft potential, Olympic rosters, some new ways to crunch the numbers and a whirlwind of celebrity stories about the pretty faces (and Ovechkin too) in the business of Professional Hockey.

Check out these Top 10 Saves of the Week with Wardo coming in at #3 for the windmill save on the Panthers Saturday night.

Canes Country Editor and the Brains of the operation, Cory Lavalette put together this analysis for Hockey's Future on the Hurricanes' minor league prospects.

No games for the River Rats till December 26th, when they return to action with a home-and-home with the Wilkes-Barre/Scranton Baby Penguins. Will Michael Ryan and Drayson Bowman return to the lineup after long term injuries? And it looks like Jiri Tlusty is still having immigration issues with only one game played for the Rats (which was a couple weeks ago).

Here are the Albany team's roster stats. Check out Jerome Samson's Shots on Goal, which leads the American League. And goalie Justin Peters (11-6-2) now ranks 5th for Save Percentage among goalies currently active in the AHL at .929.

Albany River Rats: River Rats Latest News Boychuk is River Rats player of the Week: River Rats forward Zach Boychuk netted two of the season’s prettiest goals this weekend to earn Albany’s Player Of The Week nomination. The rookie scored the Rats’ first goal Friday night in Lowell, stick-handling through a pair of converging defensemen at the blue line and darting wide of a charging goalie to pot his eighth of the year.

The Hockey News: The Hot List: WJC dreams There will be a lot of big names hitting Saskatchewan in the next few days and some of the Europeans even have local experience thanks to their time in the Western League. Here's your schedule of games for the tournament. Team USA takes on Team Canada on New Year's Eve at 8pm Eastern on the NHL Network.

LATE ADD: this just in at 4pm 2010 Draft's best to face off at Top Prospects Game - NHL.com   Must-see TV for Canes fans (and the entire Hurricanes coaching and scouting staff): The two-day affair, which features a skills competition and a regulation game, will be held Jan. 19-20, 2010, in Windsor, Ont. (And if it doesn't make NHL Network can't you just see us all on the gamethread with a feed).

Staal still hoping to shoot for gold - NewsObserver.com For Eric Staal of the Carolina Hurricanes, the time is drawing nigh, the clock ticking loudly.

Kipper earns the call for Finland - NHL.com - 2010 Winter Olympics NHL.com's Brad Holland is heeding the words of Mikka Kiprusoff, so he'll be starting in net for Finland at the 2010 Olympics.

Who's Stock is up  and Who's is down? CTV names a few of the players still in the mix to make the Canadian roster and, boy, is Mike Fisher having a really good week.

Carolina Hurricanes 2009-2010 Season: Some Stats Matter, Some Don't | Bleacher Report A 3-2 win last night against Florida started off the Canes "Holiday Homestand" on a high note, while also continuing a fairly nice run so far in December... (That was then. After last night, we're back to now. Did I mention I wasn't in favor of Rodney's return to Albany?)

The Hockey News: Campbellnomics - Dec. 22 That’s the essence of Campbellnomics, a statistic exclusive to thn.com, that provides a tangible measure for meaningful goals and situational scoring. In other words, a stat that calculates  which player scores those "watershed goals" or "goals of significance". Perhaps they can rename this the Tripp Stat?

The Hockey News: Mike Smith's Blog: What makes a good coach This seemed pertinent to Raleigh: A question often asked of GMs is, "what is the most difficult thing you have to do?" Most will answer, "hire a good coach." 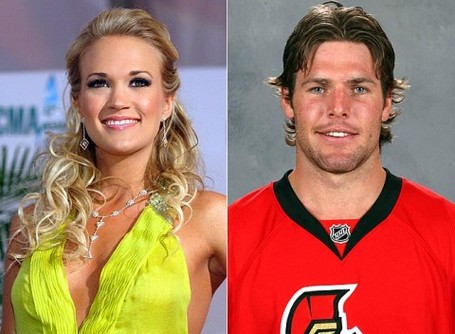 Alexander Ovechkin's latest news, photos, videos  For those of you who wondered if Ovechkin could look sexy, here are some of his photographer's best efforts. Opinions, ladies?

The 10 most embarrassing hockey moments of the last decade - Puck Daddy Some familiar faces to Canes fans. Beware the internet.

The Don of head hits - From The Rink TSN’s Bob McKenzie said during the Friday night show, "Whether the NHL likes it or not, it’s going to be dragged kicking and screaming into an era of legislation because this is becoming an athletic pandemic." More on the head-shot debate which isn't going away.

The Hurricanes are officially a Puck Daddy punchline:

Flyers, Blue Jackets rapidly approaching rock bottom - Puck Daddy   The only thing keeping the Flyers from hitting 15th place in the East are the Carolina Hurricanes, who own the basement like a blogger that just cracked open the new "Call of Duty" game and a 12-pack of Mountain Dew. Actually - this is about two other teams skidding into disaster and how they're handling the panic. Read it in the spirit of "been there done that".