Clicks and Clippings: Turning the page on 2009

Share All sharing options for: Clicks and Clippings: Turning the page on 2009

As the year counts down, yours truly, hockeymomof2, master of calendar juggling and getting everyone to the right rink at the right time, put together this schedule of important hockey games and events to close out your holiday season. With this much hockey for the holidays, who needs a BCS?

After the jump, hockey stories, updates and sentimental memories from around the the Wonderful World of Hockey.
Also, I want to hear from you, my fellow fans. Here is your chance to vote for your Hurricanes "Storyline of the Year : 2009":

First up, news on the Raleigh squad...

Strength in Goal at the bottom of the standings: You'll have to wait till the end to see Cam Ward stone Bill Guerin as the #1 Save of the Year (so far). But along the way, you can enjoy Manny Legace in Anaheim at #7 and Michael Leighton (as a Hurricane) vs the Wild at #5. Tom Barrasso smiles and shrugs.

Afterthoughts of last night's stunning upset in Washington and the broader view from Edwards Mill Road:

Nice to see Eric Staal at the top of the heap and more than a few Caps in the "dishonorables". Enjoy the moment, my friends.

John Forslund on 620 the Buzz the morning after. Happy talk.

Actually, I've uncovered the real reason for the Hurricanes success against Ovechkin and his teammates at the Verizon Center last night. Remember back after the infamous knee-to-knee hit, when Mama Ovechkin told us the solution to the problems Tim Gleason has when Alex Ovechkin is on the ice? (see "Mama Ovechkin: Gleason Needs to Get Himself a Pair of Glasses") 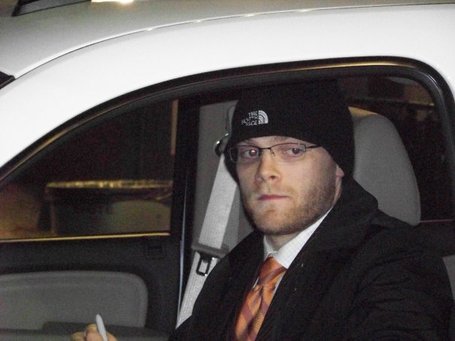 via hphotos-snc3.fbcdn.net (thanks to Jenniwa for this image). This was even easier than moving Staal to right wing. Who knew?

Lines so Crazy, They Might Work - Carolina Hurricanes - Blog "On the right there’s less thinking and more skating, and that’s my game with being on the move and using my legs to create open ice," said Staal. "The right side suits my game better and I felt a lot better there in the third period." Funny how things seem so obvious in hindsight.

Young Canes keep earning ice time - Canes - NewsObserver.com When the puck dropped Monday night against the New York Rangers, the Carolina Hurricanes had Joni Pitkanen on the ice. No surprise there. But his partner was playing only his 13th NHL game.

Video from WRAL.com: Canes' life coach plays important role in team's success Local TV report that answers our questions about a role that seems desperately needed in the room, this season perhaps more than ever. Fans of the Carolina Hurricanes may know all about the players and coaches, but they probably haven't heard about the woman who is an integral part of the all-male team.

The Big Tailgate Puck Drops Bob Hollywood Harwood Waeghe returns to the Puck Drops podcast - Dec 22, 2009. Alway great to hear the boss setting the record straight and making it all so clear.

Learning by watching: as another team stumbles down the standings, see how the Blue Jackets veteran Coach Ken Hitchcock is under the microscope Quiet ... On The Surface (Puck-rakers) Aaron Portzline: There is a belief among many fans and national media types that the Blue Jackets have "tuned out" Hitchcock. This is not an easy stance to take right now, I know, but I do not believe that is the case.

Heads-up! NHL could make rule to ban high hits - NHL.com Again the conversation on head-shots. Keep an eye on this topic, hockey fans. This may be the next be "game changer". And this: Spector: Head's up! - sportsnet.ca In the wake of his own concussion, Sheldon Souray offers a two-word solution to the growing problem.

While no one from Carolina is highlighted, we probably have a few players we'd agree you could add to this conversation: The Hockey News: Edward Fraser's blog: The crush of expectations If a player is heaped a handsome sum, he is expected to maintain or elevate his play, even though his best years may have gone by or were never even possible.

Down in the A-League

Then add this honor just announced, for Bryan Rodney, has been named to the AHL All-Star Game's Canadian roster. Great news, Bryan! We hope to see a lot more of you in 2010.

Rats Return Pistilli To Florida The Albany River Ratsannounced today that the club has reassigned forward Matthew Pistilli to the Florida Everblades of the ECHL.

Former Hurricanes in the news

Goals and Dreams embody Holiday Spirit from NHLPA.com "I believe I was about eight years old when I received a pair of skates," remembered Arturs Irbe, who was selected as a member of the class of 2010 for the International Ice Hockey Federation (IIHF) Hall of Fame. "I think I went to bed in those skates I loved them so much. I had been dreaming of playing hockey since I was four and to receive those skates meant the world to me."

Some Olympic decisions and heightened anticipation

2010 Russian Olympic Team - NHL.com One thing Russia should have no problem doing at the Olympics -- scoring goals. Not with a lineup that includes some of the NHL's elite snipers

The Team Canada Bubble: Who makes the cut, who bursts? - Puck Daddy That's why Eric Staal has been slowly inching off the bubble since his return from injury. He doesn't have Richards's Olympic experience, but he does have a 6-foot-4 frame that could be valuable up the middle on an NHL-size ice surface. We'd expect he'll snag one of the three remaining slots.

Olympic hockey teams face injury dilemma - ESPN Olympic contenders will start to finalize their hockey rosters in the coming days, but will injuries to NHLers get in the way of their fielding the best team possible?

News and Stats on Taylor Hall and the World Junior Championships

The 10 biggest storylines for 2010 World Junior Championship - Puck Daddy The Top 10 Things to Watch at this year's tournament.

McKenzie: Draft eligible Hall looks dominant so far The rule of thumb is that a draft eligible cannot hurt himself with a poor performance at the World Junior tournament. However a player can certainly help themselves by dominating. It appears that Taylor Hall will be doing just that.

And related, more dates to circle on your DVR scheduler: 2010 Draft's best to face off at Top Prospects Game - NHL.com - The dates to remember? January 19-20. Who will be behind the bench for these opposing rosters? None other than Hockey Hall of Famer Bobby Orr and Hockey Night in Canada's Don Cherry.

Marketing strategies in a down economy

Kronwalled! How Red Wings' marketing suddenly became cool - Puck Daddy Worth checking out, especially the video. This is one creative marketing that just might work in Raleigh.

But wait...isn't Ottawa in Canada? Senators slash prices as ticket sales plummet - Puck Daddy A 30-percent reduction in price for a Battle of Ontario game against the Maple Leafs? How bad are things in Ottawa?

Dave Droschak at Carolina Hurricanes.com made his list of "Carolina's Deals of the Decade". Somebody please tell me why Jokinen for Melichar and Brookbank isn't here?

Big Bad Blog Looking back: Bruins get bounced This one's good for kicks and grins. We'll always have that magical May in Boston, Caniacs.

And the Best Hockey stories from 2009, again from the master, the Puck Daddy, Greg Wyshynski.

Last, TSN somehow claimed to narrow down the Top 10 plays of the Decade which Jame Mirtle has kindly highlighted for us. No Hurricanes, but hockey beauty none the less. And truly, the calls are almost as inspiring.

With all this perspective, looking both forward and back, here again is your chance to make the call: