Clicks and Clippings: Penguins and Devils and Caps. Oh my!

Share All sharing options for: Clicks and Clippings: Penguins and Devils and Caps. Oh my!

These next six days will be loaded with challenges for your Carolina Hurricanes, with a road-trip that one writer called "brutal" and another at The Hockey News safely predicted wasn't going to give the team much chance to put a dent in the winless road-game streak. The conspicuously horrendous road-game record of 0-10-3 means that terms like Underdog and David-meets-Goliath are the phrases that will be repeated early and often. Take a look at the itinerary:

Take note, hockey fans, those first three games are against the #1, 2, and 3 teams in the East by points, with a combined record of 19-7-4 in their last 10 games. Then they fly to Ottawa, where the Senators are now 7th in the East, on the 2nd half of a back to back. This roadtrip requires all the a) Courage, b) Sisu, c) Cojones, d) All of the above, that these Hurricanes (and us Caniacs) can muster. There will be no room for the pusillanimous this week, and after the shaky win over the Canucks Saturday, if there was ever a critical time for a show of leadership and character, I believe this will be it. Who do you see will come to fore and lead this team most visibly over the next 6 days? That is your poll question this morning.

Then, after the jump, some news and views from around the League, Albany, and maybe even checking in on Coach Laviolette.

Calling in the reserves

The Canes announced yesterday that Bryan Rodney was enroute to Albany. He scored a goal in last night's game in the River Rats 4-1 victory over the Wilkes-Barre/Scranton Penguins. However Jay Harrison and Brett Carson will join the Canes tonight, if Niclas Wallin can't play. Here are a couple reports from the Rats' side of the story.

Rats notes ‘n quotes: Carson also Carolina-bound - timesunion.com - Albany NY The Rats, who have been carrying eight defensemen most of this month, were down to six. Even though D Bryan Rodney was returned from Carolina, the Hurricanes recalled D Jay Harrison in the morning and D Brett Carson about an hour before the game.

The Infestation: Carson called up Brett Carson impressed the NHL coaches during the Canes' training camp in September, but was sidelined early in the season with a broken wrist. His performance in Albany, both before and after the injury, has been nearly flawless. Carson has developed tremendously over the past year and provides a unique combination of offensive and defensive awareness, putting him in the running for a permanent spot in the NHL, either this year of the next. In 14 games with the Rats this season, Carson has three goals, eight assists and a plus-4 rating.

Newly acquired Czech winger Jiri Tlusty was held up at the border Saturday, but did make it to Albany to play in Sunday night's game. No action from him yet, but those like Abramsdoug who watched the feed of the game last night commented his speed was impressive and he looked like a good fit with Zippy Zach Boychuk. Tlusty will wear #19 when he plays in Raleigh. A little bit more on the Rats after Saturday's win over the Phantom's with some nice player quotes as well is here.

This is a story on Tlusty, the day after he heard news of the trade to Carolina: Tlusty eager for new start with Carolina - thestar.com Between saying goodbye to friends and packing his bags, a harsh reality came into focus for Jiri Tlusty on Friday.

I see that ESPN's Pierre LeBrun is saying that the Hurricanes are completely off the hook on Peter Laviolette's contract with his new position with the Philadelphia Flyers. ESPN.com -- LeBrun blog -- Weekend roundup Peter Laviolette returns The Carolina Hurricanes, like other small- to medium-market teams, count every dime. So imagine their pleasure with the fact the Philadelphia Flyers are paying the full freight on the year and a half still left on Peter Laviolette's contract with the Canes. Everyone goes home happy in this one; Laviolette gets a new start, the Flyers get their man, and the Canes save some coin.

And here's some recent calculations of where we stand in regards to the Salary Cap, linked originally from Puck Daddy. Check out the site at nhlnumbers.com and take a look at space given Long Term Injured Reserve (LTIR) allowance, with Staal, Ward and now Corvo all suffering major injuries, only a third of the way into the season.

Building on the Injury issue

Tendon injuries preventable: Don Cherry Carolina Hurricanes defenceman Joe Corvo was the most recent player to get clipped by a skate on the back of the leg, and it's the type of injury that has to be addressed.

I linked this in another context in a fanpost over the weekend but here is another view on how dangerous the NHL is now. Nikita Filatov: 'I realized Hitchcock does not plan on trusting me' - Puck Daddy. Filatov recently returned to his native Russia to play in the KHL and was interviewed on his experience with NHL hockey.

Question from Russian journalist: You played in the NHL. Did you feel an overwhelming level of aggression there? We can remember a very recent example when a Florida defenseman hit his own goalie in the head with a stick.

Filatov: "I did not see that moment. But injuries in the NHL happen virtually every day. It's like madness over there. People come out to play to battle. It's like a war. No one spares anyone. And it doesn't matter if you're a star or a rank and file player. Tough guys are openly ready for a fight. You dump the puck in and chase it. That's exactly what I was doing when I was playing on the fourth line with Columbus with fighters Boll, Dorsett and MacKenzie."

With the one-year anniversary of Rutherford's release of Paul Maurice 2.0 last week, I thought this was worth following. The Philadelphia Flyers players began the season with high expectations but now seem to be suffering through a enormous crisis of confidence and leadership prior to the firing of John Stevens last week. I liked this story from ESPN's Scott Burnside to hear how a similar situation is playing out compared to the woes here in Raleigh. Pay attention in particular to the description of the dynamic between Flyers' captain Mike Richards and veteran/legend (but new-to-Philly) Chris Pronger.

Here are a couple predictions on the longevity and appropriateness of this new marriage. Phil Sheridan: Flyers' organization drifts nowhere | Philadelphia Inquirer | 12/06/2009 and What We Learned: Suspension debates; wrong coach for Flyers? - Puck Daddy (from Ryan Lambert)

The Flyers were embarrassed Saturday night in the debut of Coach Laviolette (and McCarthy) against the Ovechkin-less Capitals. The "least-likely-to-ever-win-the-Lady-Byng" Daniel Carcillo dropped the gloves a little early, early in the second period, received 19 minutes in penalties and was further suspended 4-games for his "sucker punch" of the Capitals' Matthew Bradley (here's one story with video). Wonder how long before he sees more than 10 minutes icetime under his new pacifist coach?

In case you were wondering how the Flyers responded to their first full practice with Coach Laviolette On The Fly - Official Flyers website blog - Philadelphia Flyers Here's a sample from Danny Briere: "It is exciting. This is something new. It is going to take a little bit of time for us. Right now, we are going through the basics, the emotions and the new systems. But the mood is good and the guys are excited about it. We believe this is going to work." 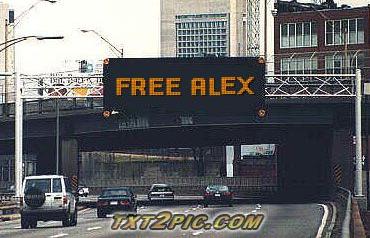 Apparently those inside the Beltline are having a hard time coping with the suspension of the man known as Alex the Gr8. Over at SBN blog Japers' Rink, they created several signs for Caps fans to bring to the home game Friday in support of their big Russian gun. The "Free Alex" Movement - Japers' Rink

Harwood linked this in some comments over the weekend but here it is again if you missed it. Suspended Alexander Ovechkin refuses to stop reckless play - Jim Kelley - SI.com To date, most of the reaction to yet another dirty hit by Washington Capitals superstar forward Alexander Ovechkin has been pointed at the NHL and Colin Campbell, its Director of Hockey Operations.

Still haven't had enough? Alex Ovechkin's defense of the caveman - Puck Daddy More quotes from Ovechkin to a Russian journalist.

Hockey in the Carolinas

Always must listen to the Hurricanes Report (podcast) - from this past Friday, December 4th.

Droschak: Legace as Old School as They Come - Carolina Hurricanes - News From last week, some of the goaltenders quirks from David Draschak. Before the big question of whether we will be seeing any of this veteran after Wednesday and Cam Ward's anticipated return.

Talkin' hockey is winning hockey in Charlotte - NHL.com - ECHL Report There is Hockey in the other Carolina city.

Here's a possible tech-y solution on the way to a hockey arena near you. Just as baseball has a computerized system for tracking pitches in the strike zone for TV... - On the Forecheck

Finally - there is a new and improved Fox Sports Carolina Hurricanes website you can bookmark here: Fox Sports Carolinas. This week they are featuring the recently completed "In his own Words: Eric Staal" in conversation with John Forslund. While I think we all can safely predict that this will be aired plenty of times in the next few years before those 7:30pm games, here you can see it on the small screen, as many times as you like.

Again, here's your chance to name your Hurricanes superhero who will do the most to carry the team on his shoulders this week: