Share All sharing options for: Canes Take Out Thrashers, 2-0

The Carolina Hurricanes dominated the Atlanta Thrashers on Saturday night as they opened the game with one of their most impressive first periods since the Stanley Cup winning season.  The Canes out-shot the Thrashers 21-4, out-chanced them 11-1, and controlled play in the visitor's end for almost the entire period. 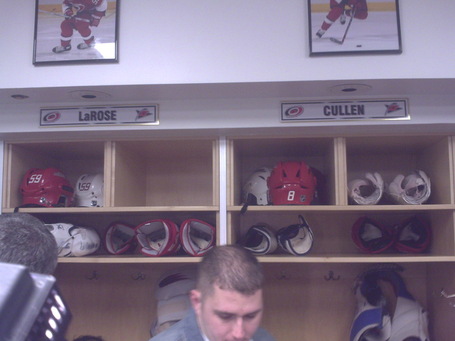 Matt Cullen and Chad LaRose are turning into a "dynamic duo" as the locker room next door neighbors have combined for two short-handed goals in the past two games.  In the previous win against Tampa Bay, Cullen fed LaRose for a score but this time LaRose returned the favor hitting Cullen in perfect stride as the speedy center broke into the clear.  Cullen made no mistake as he wristed a shot past Atlanta goalie Kari Lehtonen to give the Canes an early lead about seven minutes into the game.

Carolina kept the pressure on and peppered Lehtonen with shots as they skated almost at will in the Atlanta zone.  To the goalie's credit, he did a marvelous job keeping his team in the game and probably should have been one of the game's stars.  The home team ended up with 40 shots on goal while the visitors could only muster 19.

Later in the opening period, Ray Whitney found himself all alone breaking into the Atlanta zone.  Matt Cullen led him beautifully and Whitney was able to control the puck on the soft ice and fake out Lehtonen for his 16th goal of the season.

Cam Ward was not a busy player most of the night, but he was up to the task when needed.  The goalie earned his third shutout of the season and the ninth of his career.  It was his 16th consecutive start as he quickly approaches his career high, 20 consecutive starts from last season.

The final two periods were more defensively orientated, but the Canes did try to exploit the Thrashers mistakes into scoring chances.  The defense had an excellent game and minimized Atlanta's scoring chances throughout.

Next up will be Vancouver on Tuesday night as the Canes travel out west for a 3 game road trip.

The Thrashers had a contingent of fans who made their presence known, no doubt contributing to the atmosphere. Kudos to them for their loyalty, but what's up with the kazoos?

It seemed like Colby Armstrong was a target last night as every Hurricane who had a chance would take a shot at him.  (clean hits of course).

Tuomo Ruutu led the team with 4 hits.  Tim Gleason, Chad LaRose, and Justin Williams were credited with 3 each.

Brandon Sutter's ice time increased to over 9 minutes while Rod Brind'Amour's was reduced to 13 minutes, probably his lowest total of the year.

Eric Staal continues to improve in the faceoff circle, winning 11 of 18 for 61%.

Not only did Chad LaRose have 3 hits and the game-winning assist, he led the team with 6 shots on goal and had 3 take-aways.

Joe Corvo also could have easily been one of the stars of the game.  He was solid in his own end all night while being responsible for shadowing Ilya Kovalchuk, no easy task.  He led all skaters with over 27 minutes of TOI.

Matt Cullen looks like he is at the top of his game and has more jump in his step than he had earlier in the year.  It seems like he has finally shaken off the ill effects of his lingering injuries.

The Canes go to Vancouver on an upswing, winning 4 of their last 5 games.  Things will not be as easy for them out west though.

Attached is a video I took of the Cam Ward interview after the game.