Thanks for the Memories, Mr. Wesley

Share All sharing options for: Thanks for the Memories, Mr. Wesley 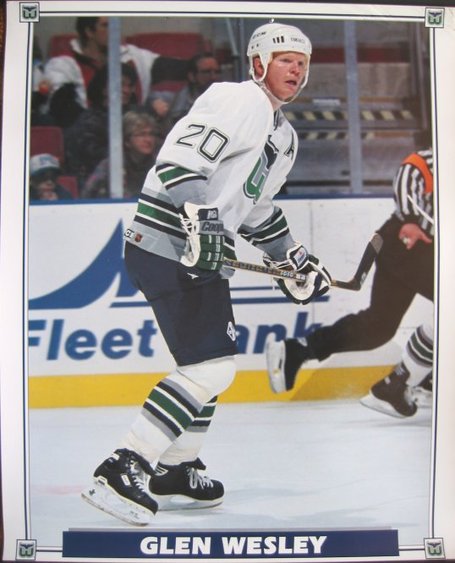 Tonight is Glen Wesley night at the RBC as the Hurricanes will raise "number 2" to the rafters in a pregame ceremony that is sure to be emotional.  Wesley had a distinguished career with the Canes/Whalers and has played more games than any other player in a Hurricanes jersey.  (He is second only to Ron Francis for total games played in franchise history, including games with the Whalers).

I'm not going to get into all the statistics and history which you can probably read in a dozen different articles today, but I will share some memories that I have of the hard working redhead.

In my opinion, Wesley was a fearless hockey player.  How else could you describe someone who repeatedly threw their body in front of a puck moving over 100 miles per hour?  The defenseman was a shot blocking guru and sometimes would do it repeatedly on the same penalty kill.  I think every fan can remember at some point or another watching Glen hobble off the ice after being hit, only to come back and take his normal shift just a couple of minutes later. 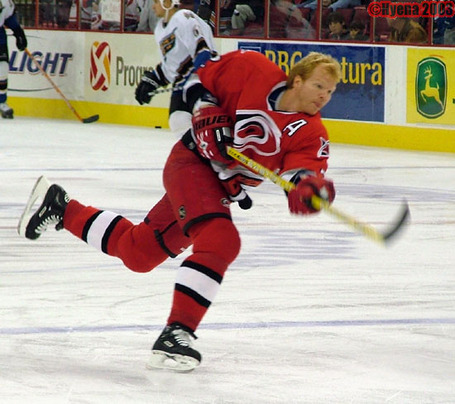 Like most hockey players, the blueliner played in pain.  I remember him crashing into the boards and hurting his shoulder one season.  Then there was the time he fractured his jaw when he was pushed into the open door of the penalty box.  Of course there was also the time he needed neck surgery.

Finally, the thing that I will always remember is that after winning the championship in 2006, Wesley  didn't spend his "day with the Cup" at a party in New York City or Hollywood, he shared his day with Marines at Camp Lejeune.  That really impressed me and indicated to me the man's true character.

For more detailed information about Wesley's career , Dave Droschak did a great job with a three part article.

Wesley was acquired via trade with the Bruins for three first round draft picks and writer Mike Loftus describes who Boston was able to obtain with those picks.  It's a bit of a stretch saying that they eventually obtained Milan Lucic with related assets from the Wesley deal, but it's an interesting read just the same.

Strangely enough, this will not be the first time the franchise retired "number 2".   The Hartford Whalers retired the number in honor of Rick Ley after the fellow defenseman retired in 1981.  I wrote an article about that back in June when the Canes first made the jersey retirement announcement.

This will be a night you will not want to miss if you are a Glen Wesley fan.  The Canes are expecting a capacity crowd, so come early to beat the traffic. 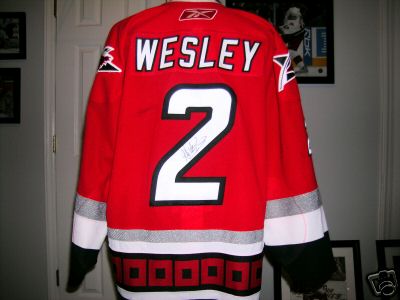 Of course there is an important hockey game against the Bruins after the ceremony.  We will have a game preview for that matchup around lunchtime.